October marked an interesting and unusually volatile time for markets. With the U.S. Federal Reserve (Fed) and the Bank of Canada (BoC) both making rate announcements on the same day in late October, investors eagerly awaited the central bankers’ economic outlooks.

Jeremy Powell, chairman of the U.S. Federal Reserve, had embarked on a path of quantitative easing throughout this year, with interest rates cutting the federal funds rate for the third time this year. The S&P 500 touched new all-time highs on Nov. 1, as the Fed steered the discussion to a robust economic situation, with growth being better than previously expected, leading to a nice gain in U.S. markets.

Active managers anticipated this change, by lowering U.S. dollar cash holdings and deploying funds into the market. As the U.S. gears up for presidential elections in 2020, further rate cuts would stimulate the economy, boost stock markets, and consequently add bolster the Republicans’ campaign.

Powell did stress that the government has been buying bonds again, hence increasing the supply of money in the economy, which should help boost the main U.S. stock indices. Consumer spending was a big contributor to the increases in output, and with a cut in the lending rate, it should make it easier for Americans to increase consumption even more in the coming months.

The Bank of Canada seems to have a very different narrative. Governor Stephen Poloz and the BoC are much more pessimistic on the outlook of the economy, while Powell and the FOMC seem to be much more optimistic. The uncertainty arises because Canada’s economy is so closely tied to the U.S., so it’s very difficult to assess which narrative is the correct one.

In contrast to the Fed’s move, the BoC kept interest rates unchanged, citing the potential return of bidding wars as a key determinant affecting the sensitivity in the housing market. Money managers increased Canadian dollars, sensing that the S&P/TSX Composite may have had its run for the year as global economists predict a devaluation against the United States dollar.

The Bank of Canada’s comments also seem to be more cautious, citing the USMCA trade agreement and the tariff war between China and the U.S. On the other hand, U.S. trade representatives seem to be very hopeful about trade negotiations in the future and further expansion of the global economy once certain milestones are met.

Since becoming BoC governor, Stephen Poloz has been fairly defensive in monetary policy, which helped cushion last year’s meltdown in the housing market. Immigration and job growth continue to be stellar, which could help raise the Canadian stock indices further. The BoC is playing monetary policy well, holding back on rate cuts against the day when we do hit a tangible speed bump in growth.

In Asia, Japan continues to face economic uncertainty as it fails to open up to foreign investors, and we can see managers lowering their Japanese yen-denominated holdings. The eurozone has been hit with tail winds from the U.S.-China trade war, but should recover relatively quickly. In fact, money managers have been buying euros as the currency may have entered oversold territory. The United Kingdom remains in the same situation, with a different captain, Boris Johnson. The deadline for Brexit continues to be delayed, and the nation has now been asked to decide the issue with a general election. Investment managers have consequently been lowering their Sterling-denominated holdings as the currency may be in for a rude awakening if the country continues to fail on its promises.

This analysis focuses on the Canadian investment fund industry, and how portfolio managers are allocating capital in major currencies. The currency analysis excludes all cash equivalents, such as bonds with less than one year to maturity and collateral cash held to fulfill debt covenants. We believe by excluding these items, we can home in on the deployable cash in investment funds and assess the street’s market sentiment. We then further analyze the liquidity of investment funds on a cash and cash-equivalents basis, categorized by sector, to help us understand which verticals portfolio managers are currently overweighting and underweighting. 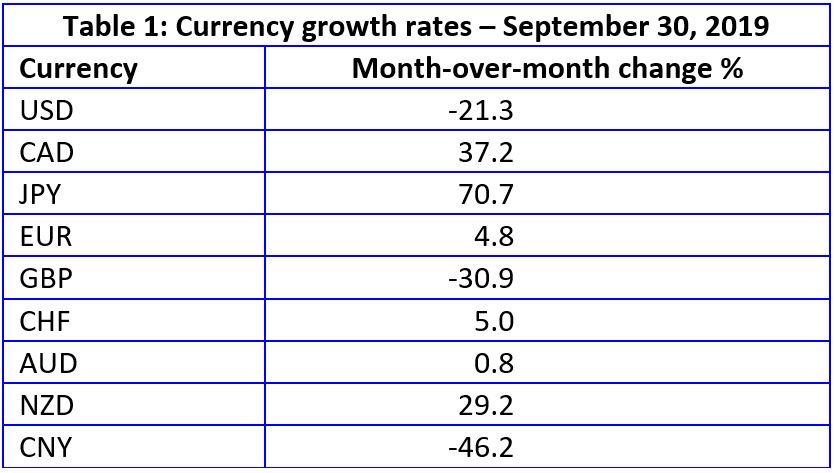 Chart 1 illustrates the mean cash percentage in investment funds for nine major currencies in sequential order from April 2019 to June 2019. 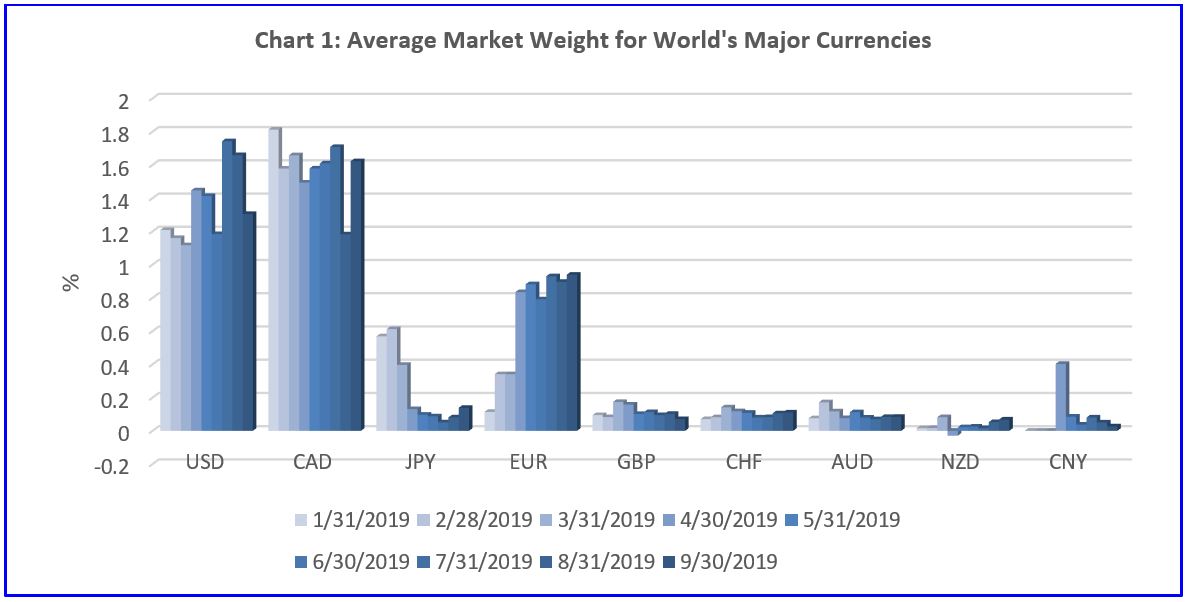 U.S. and Canadian cash on hand 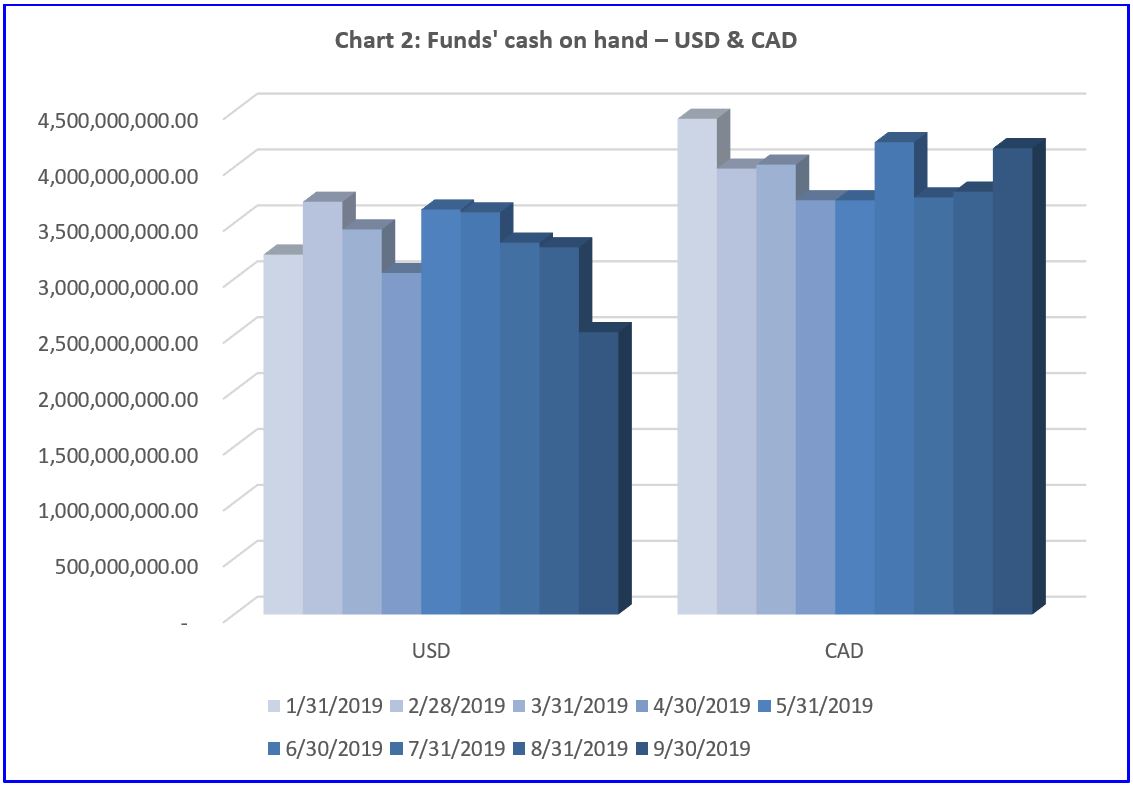 The Investment Fund Liquidity Ratio is calculated as the amount of cash in a fund relative to its total assets. It is important to assess this ratio when analyzing investments and allocating capital. The ratio has the power to give incredible insight into the overall flow of capital into specific verticals and the bullish or bearish sentiment in these investment categories. Table 2 shows the top and bottom 10 out of applicable sectors based on the mean ratio of over 3,000 investment funds with a mandate to invest in the corresponding sectors.

Items indicated in red highlight the sectors with the highest ratio, which translates into underweighting their respective indices. This could mean that portfolio managers are expecting negative performance in these categories.

Items in green highlight the sectors with the lowest ratio, which translates into overweighting their respective indices. This could mean that portfolio managers are expecting positive returns in these categories, in the short term. Looking at Table 2, you can see that the top cash holdings are in fixed-income investment categories. Investors may have finally received the reassurance needed to overweight some equity sectors and move away from high yield and corporate bond investment products. Canadian and North American equity also have had some profit-taking, hence the cash holdings in these areas are increasing. However, the economy seems solid, and further upside in these verticals is a true possibility.

One of the most notable points to mention is the increase in weighting for Asia-Pacific investments, especially China and ex-Japan strategies. Investors are currently flocking to these markets as past forecasts of growth slumps may have been a little too pessimistic. Infrastructure spending is strong, with fiscal policy across all developed nations playing a vital role in the expansion of their respective economies. The U.S. has seen interesting trends in infrastructure, which is typical during an impending election year, which help elevate financial markets. Gold continues to shine as a store of value in tail-risk events, and should see healthy growth in the months ahead.

Nash Swamy is Analyst, Analytics & Data, at Fundata Canada Inc., a leading source for investment fund information. He is involved in the classification of ETFs and risk ratings, derivatives and warrants, and hedge fund data collection for liquidity analysis. Questions regarding the above analysis can be directed to analytics@fundata.com.

Commissions, trailing commissions, management fees and expenses all may be associated with fund investments. Please read the simplified prospectus before investing. Investment funds are not guaranteed and are not covered by the Canada Deposit Insurance Corporation or by any other government deposit insurer. There can be no assurances that the fund will be able to maintain its net asset value per security at a constant amount or that the full amount of your investment in the fund will be returned to you. Fund values change frequently, and past performance may not be repeated. The foregoing is for general information purposes only and is the opinion of the writer. No guarantee of performance is made or implied. This information is not intended to provide specific personalized advice including, without limitation, investment, financial, legal, accounting or tax advice.