In last month’s Fall Economic Report, the Finance Minister set the stage for the performance of the Canadian economy and how the new fiscal projections in the document may impact your pocketbook and your retirement savings. There is some good news in the numbers, but as Canada prepares for a potential global economic downturn in 2020, there are some storm clouds on the horizon, too. Most significantly, Canada’s accumulated federal debt is expected to hit new heights: $810 billion by 2025.

1. Most Canadians are working. From a national perspective, Canada has a very low unemployment rate, the lowest in 40 years. The labour market welcomed 400,000 more workers, registering the strongest growth since 2007 and that is after the loss of 71,000 jobs in November. The integration of women and new immigrants has contributed significantly to growth. But those recent job losses may be a precursor to what is to come in the next decade as demographics have a bearing on labour market growth. Further, as we head into an economic downturn, there are regional disparities and job vacancies will increase as the boomers retire in the next decade.

2. New immigrants have contributed significantly. Newcomers to Canada now represent three quarters of Canada’s population growth, which is at its fastest pace in more than 20 years. This is an important contributing factor to labour market growth.

3. Economic growth is slowing. Real GDP growth of 1.7% for the 2019 year, and remaining below 2% starting in 2020, where the projection is 1.6%. The Conference Board of Canada predicts an average economic growth rate in the range of 1.8%.

4. Interest rates remain low for investors. The benchmark rates are currently set at 1.75%, which gives some room for reduction, should the economy require additional stimulus. This is good for business investors and mortgage holders.

5. Export weakness and business confidence affects business investment. New trade deals with the U.S., Mexico, and potentially the China-U.S. Phase 1 trade deal agreed to on December 15, are expected to reduce uncertainty and bring growth opportunities. However, business investment in Canada has lagged behind that of other major advanced economies in recent years. The Economic Update states, “indicators of overall business confidence and intentions to invest have remained modestly positive over the past year.”

6. Canadians have lots of debt. Consumer debt-to-income ratios are at record highs. In the period 1990 to 2019, the average ratio was 1.27 according to Statistics Canada. The most recent numbers for the second quarter pegs that number at a record high of 1.77.

7. Bankruptcies are rising in Canada; the first increase in close to two decades with personal insolvencies raises by 8.5% in 2019 and business insolvencies up 4.1% over the period September 2018 to September 2019.

8. Taxes keep rising. With regard to taxation, across the board, we’ll see some increases in the forecast period. The accompanying table shows how it will shake out, in comparison to the last federal budget.

Despite these tepid numbers, personal income tax (PIT) revenues were projected to increase by 6% – three times the real GDP growth – or $9.2 billion in 2018-2019. In 2019-20 and over the forecast period, they are expected to increase by 4.7%. Over the remainder of the projection period, PIT revenues are now forecasted to increase faster than growth in nominal GDP, which is averaging 3.8% annually according to the documents, reflecting the progressive nature of the income tax system combined with projected real income gains. No other specific increase was provided. However, as you can see, the projection for PIT revenues for 2019-20 is an increase over the last forecast in the federal budget. The number at the time was 4.3%.

Corporate income tax (CIT) revenues were expected to increase by $4.2 billion, or 8.7%, to $52.0 billion in 2018-19, as per the March 19, 2019, budget. At least part of this large increase was attributed to several large reassessments resulting from audit activity by the CRA.

Corporate income tax revenues are now projected to decrease by $3.6 billion, or 7.1%, to $46.8 billion in 2019-20. This reduction is largely due to the cost of tax incentives introduced in the 2018 Fall Economic Statement, introduced to encourage business investment. Over the remainder of the projection period, CIT revenues are expected to grow at an average annual rate of 4.9%, driven by growth in corporate profits and a lower cost of the tax measures as they mature, according to the Economic Update.

The accompanying table shows the summaries regarding revenues, expenses and debt. 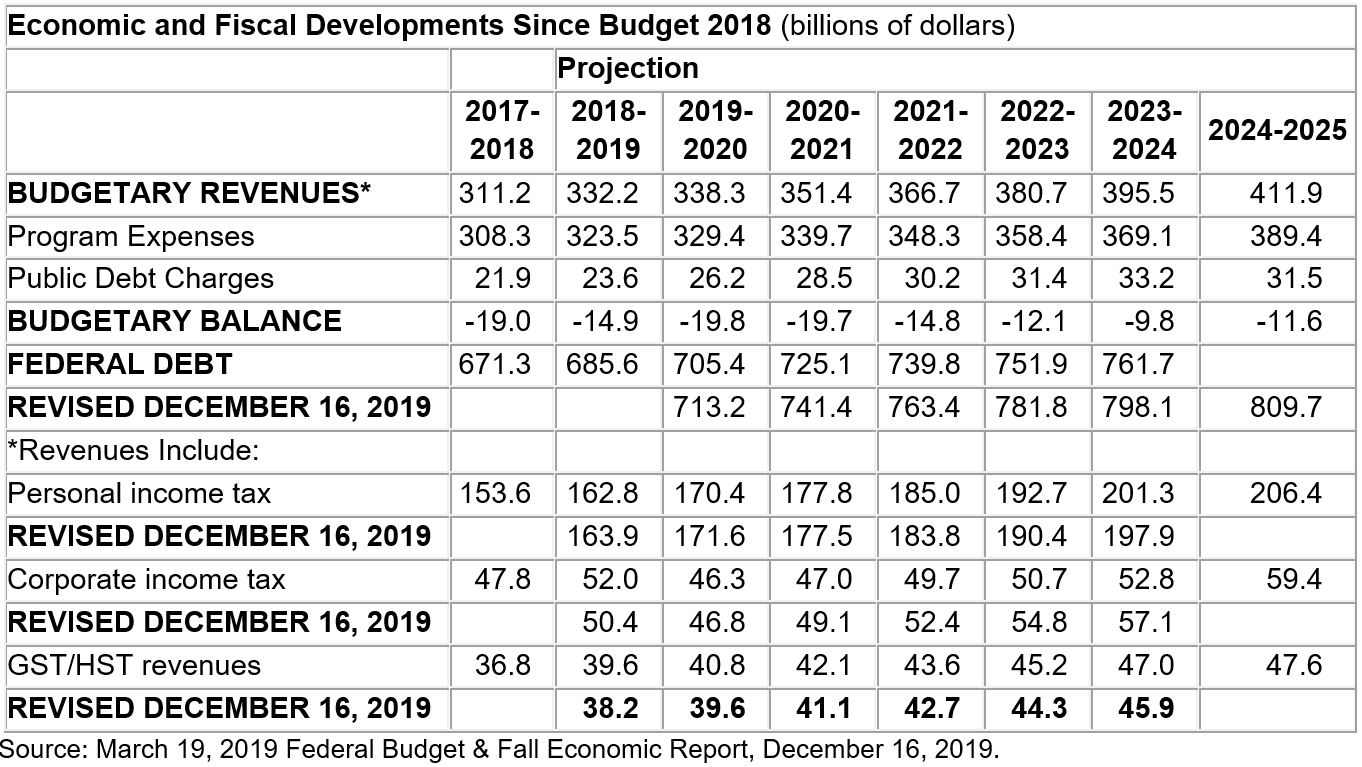 From the Economic Report, it is clear that taxes are going up, at higher rates for corporations than for individual taxpayers, all while the economy is slowing. High taxes on small corporations are damaging. They are often simply passed along to consumers or worse, inhibit future investments and employment opportunities, especially in smaller towns across Canada.

It will be very important to monitor changes in the marketplace over the next several months to see how small businesses in particular will absorb the impact of these projections and the taxes that are predicted to go with them.

© 2020 The Knowledge Bureau, Inc. All rights reserved. Used with permission.

Evelyn Jacks is an award-winning financial educator, best-selling author, tax expert, and founder of Knowledge Bureau™, a widely respected financial education institute and publisher which has welcomed thousands of students from the various financial services to its online and in-class programs. Follow Evelyn Jacks on Twitter @EvelynJacks. Visit her blog at www.evelynjacks.com.