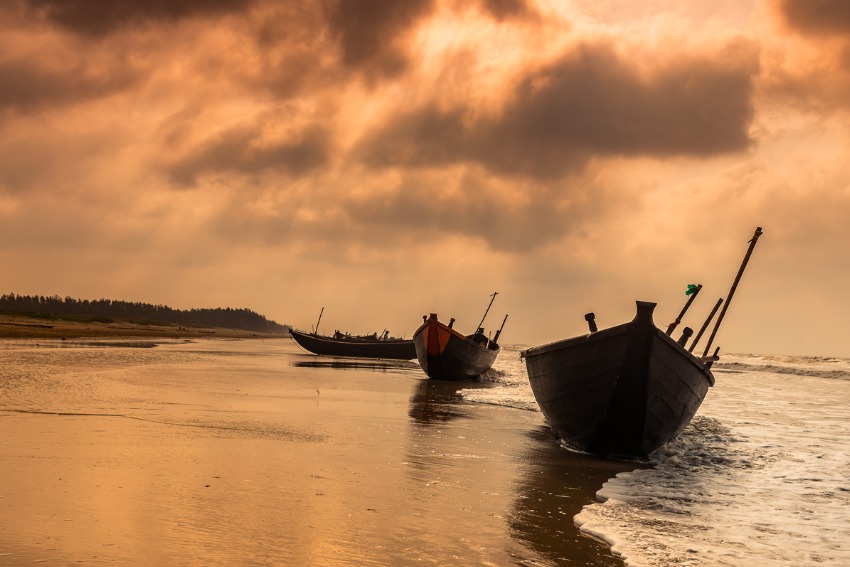 What can be said about the latest breakout in global stocks? On the surface, politics seem to play the most pivotal role. Pistols have been holstered in the U.S.-China trade skirmish, and Prime Minister Boris Johnson has secured a sweeping majority (an election result that almost certainly removes the threat of a “no deal” Brexit). Suddenly, global recession angst is rapidly fading from view. The stock market’s swagger is back.

But is any of this new? Hardly. A signature feature of the post-2008 landscape has been rolling crises – regular political panic attacks followed by eleventh-hour rescues. Indeed, rather than marking a point of departure, the latest action extends a long narrative. It is now the third soft patch since 2008 where the broad consensus misdiagnosed an imminent recession.

These episodes — which our investment team has dubbed “born again bull markets” — have served as a kind of system re-boot, providing lower interest rates, better valuations, and decreased investor expectations. Ultimately, these resets extend the life of the cycle.

But the recent rally strikes a different tone. Crucially, U.S. stocks are underperforming. Looking back, the leading stock market since 2008 has been the United States. Domestic stock prices have surged relative to their non-U.S. counterparts by a magnitude that that is on par with the 1990s bull run. Most glaringly, European equities have underperformed the U.S. by some 50 percentage points over the last decade.

In hindsight, all this makes sense. In environments of subdued global growth, U.S. equities tend to thrive. Given that the US has the largest equity culture, home biases tend to enlarge when confidence in the outlook is lacking. The makeup of the U.S. stock market, with its larger weighting in growth stocks, is also a factor. With a sluggish backdrop, growth can command a premium.

What’s more, several tailwinds have benefited the U.S. Starting points are always important. Beginning in 2009, the Fed was the most aggressive liquidity provider, leading the world in unconventional monetary policy and introducing us to an alphabet soup of monetary policy tools (QE, TARP, etc.). The U.S. also initially benefitted from an extraordinarily competitive currency, an inexpensive stock market, and a handful of the stock market’s darlings (i.e., the unstoppable technology titans complete with a catchy acronym, “FAANG,” for Facebook, Apple, Amazon.com, Netflix, and Google before its corporate name change to Alphabet). Booming corporate profits underpinned the entire show.

Yet, few of the above trends remain in place today. The FAANGs have been underperforming for some time now, increasingly viewed as tech monopolists abusing their power. U.S. equity valuations have also become stretched, trading at a 33.6% premium to the remainder of the global benchmark on a price/forward earnings basis and some 113% on a price/book basis.¹ And even though the U.S. share of global GDP declined to only 23% recently from 32% in 2001, its share values nevertheless now command 63.4% of the MSCI World Index market capitalization. U.S. stocks are priced for near perfection. Yikes!

The problem with long periods of investment outperformance is investor perception. With every rally higher, another coat of varnish goes on the reputation of the outperforming investment. Soon, the asset class glistens so brightly that no one can see any downside. The brightness becomes blinding.

This is the challenge with investment leadership changes. Old narratives take time to be replaced by new ones. Investors have a hard time updating their mental models when something has worked well for so long.

Still, cracks have been spreading for some time in the U.S. outperformance story. Deeper fundamental change is afoot. How so? To begin, America’s waning global leadership has diminished the attractiveness of its country as a destination for foreign capital. Trump’s infidelity to the post-war system and his Kanye-esque rants from the Twitter pulpit (totaling 47,085 tweets since he joined the platform) took a proverbial wrecking ball to long-standing alliances. “America first” policies have been clearly counterproductive. Few friends have been made. In a globalized world defined by a move toward closer interconnectedness, the biggest loser has only been the U.S.

But a more immediate dynamic is underway. Consider that the US has painted itself into a policy corner. Several constraints limit its policy flexibility to counter slowing growth. Most conspicuously, the U.S. is already well into a kind of monetary dark age and has limited room to stimulate. Federal Reserve Board Chairman Jay Powell, despite his newfound savoir faire, has acknowledged the Fed’s constraints. The policy straight jacket is firmly in place. And like his counterparts in Europe, Powell has emphasized the importance of fiscal expansion to share the policy burden.

But on the fiscal side, limitations also exist. The U.S.’s corporate tax cuts led to a material one-off advantage for U.S. earnings, but do not provide a sustainable boost to longer-term growth. Now, the government is running a sizable fiscal deficit, the economy has a substantial current account deficit, and further fiscal stimulus is unlikelym, given the split Congress.

On a global scale, consider the contrast. In many countries outside the U.S. (most notably in emerging markets), policy options are far more plentiful. In South Korea, Japan, and Poland, significant fiscal expansions have been announced. In Brazil and India structural reforms are swiftly underway. In China, regulatory changes are rapidly opening the financial sector. And interest-rate-cutting cycles have begun in Russia, Indonesia, and a whole host of other countries.

Investors should pause and reflect on the above points. Here is a set of countries outside the United States with more policy levers than growth headwinds. This remains their ace in the hole. With ample room for further monetary easing, infrastructure spending, and other forms of fiscal stimulus, policymakers in these countries are far less concerned about a sudden growth downturn than the common narrative would lead one to believe.

All of the above is now showing up in the growth profiles of these countries. This will lead to better earnings-driven stories. Combined with far more attractive valuations, capital should continue to move away from the U.S. into these regions. 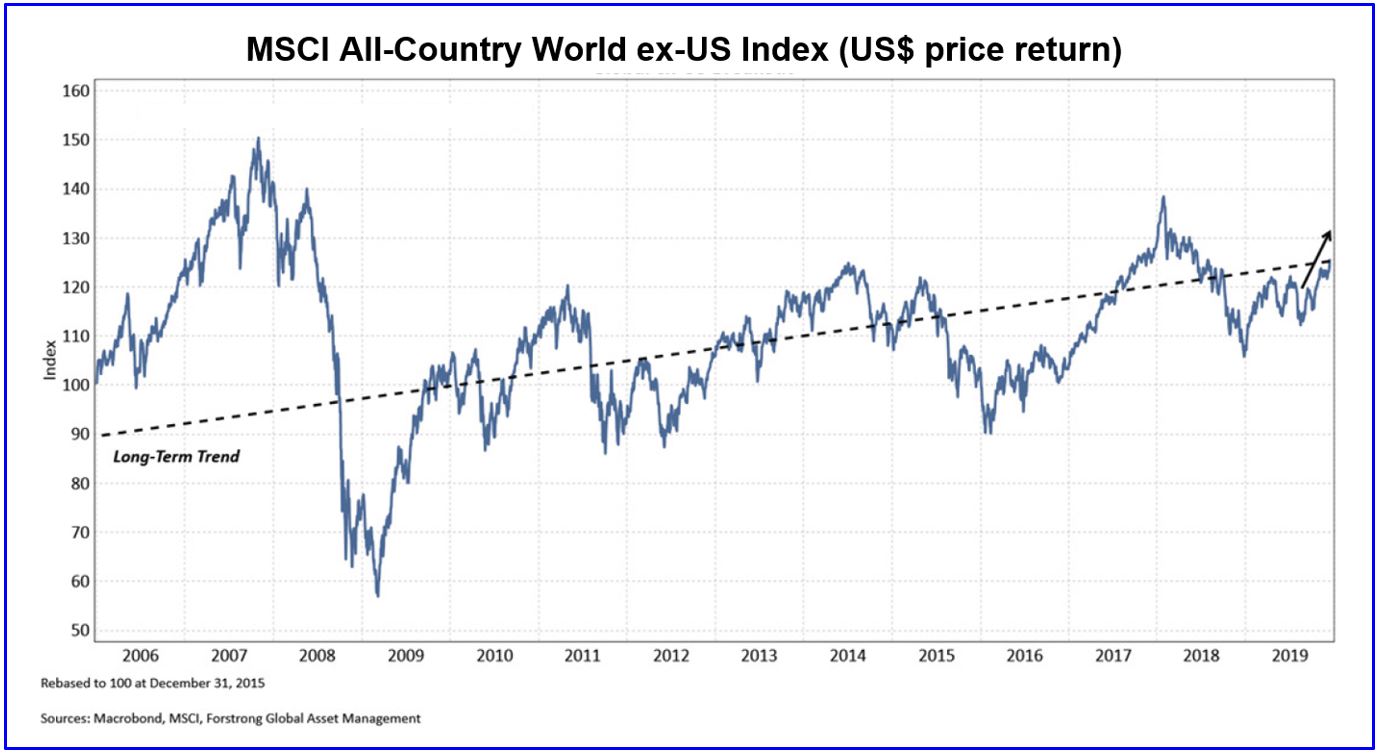 Should the above perspectives be a buzzkill for investors? To be clear, we are not recommending selling all U.S. stocks and cancelling the Peloton subscription. Some exposure is still warranted, and specific sectors should be overweighted (notably the U.S. financials).

However, our base case is that select non-U.S. equities will take leadership. The U.S. dollar will also begin its foray into a multi-year bear market. Most macro forces that have favoured the dollar – relative growth, interest rate differentials, and a persistent safe haven appeal – are now reversing.

To be sure, this is the early stage of a long journey. The conditions for a multi-year rotation away from the U.S. have arrived. Initially, investors should focus their foreign equity purchases on trade-war casualties. With a bottoming manufacturing and semi-conductor cycle, obvious candidates are the country equities of South Korea, Taiwan, and China. But longer-term opportunities in Europe, Japan, and other select emerging markets are also compelling. Intrepid global asset allocators should position accordingly.

Tyler Mordy, CFA, is President and CIO for Forstrong Global Asset Management Inc., engaged in top-down strategy, investment policy, and securities selection. He specializes in global investment strategy and ETF trends. This article first appeared in Forstrong’s Global Thinking blog. Used with permission. You can reach Tyler by phone at Forstrong Global, toll-free 1-888-419-6715, or by email at tmordy@forstrong.com. Follow Tyler on Twitter at @TylerMordy and @ForstrongGlobal.