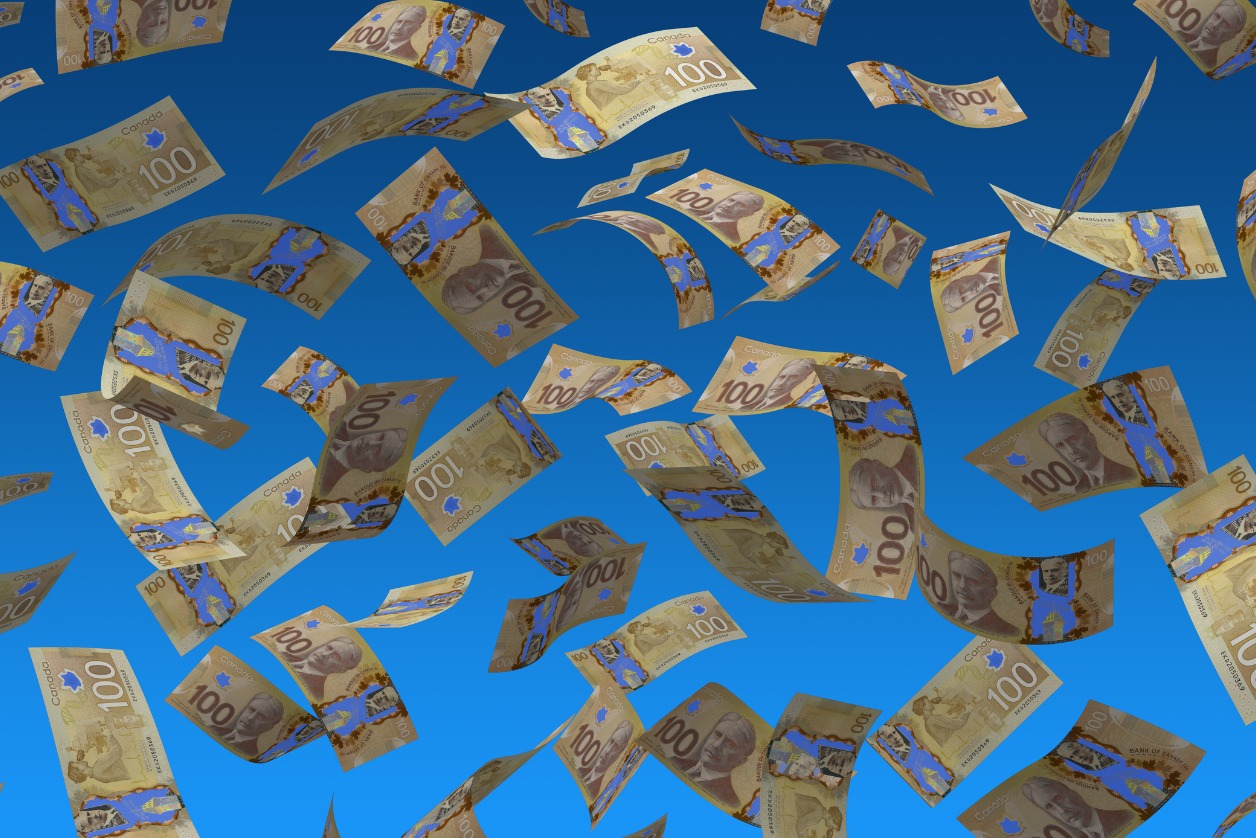 Last time, we looked at the first of the three themes – activity restart – from our 2020 mid-year outlook report to guide our investment decisions tactically for the balance of the year. In the second installment we dive deeper into the second theme – the emerging policy revolution. Central bank purchases of government bonds have blurred the lines between fiscal and monetary policy, which presents important implications for investment portfolios.

Recent developments underscore two of our 2020 midyear outlook investment themes. First, an activity restart is now underway, with the Canadian labour market staging a much sharper rebound than economists expected in both May and June. The unemployment rate has fallen from its recent peak of 13.7% to 12.3%, and more than 40% of the lost jobs since the pandemic took hold have been restored, representing a much faster rebound than the aftermath of previous economic downturns. Employment will likely improve further as provinces steadily reopen. Second, a policy revolution is now underway, with the Canadian federal government confirming an historic budget deficit in its summer 2020 fiscal snapshot and the Bank of Canada purchasing much of the new debt issuance.

On July 8, the Ministry of Finance announced that it expects the federal deficit to reach C$343 billion (16% of GDP) during the current 2020-21 fiscal year, which is nearly C$100 billion above the Parliamentary Budget Officer’s June deficit estimate. Federal debt is slated to grow beyond C$1 trillion in 2021, though debt servicing costs are set to decline thanks to ultra-low interest rates across the maturity spectrum. 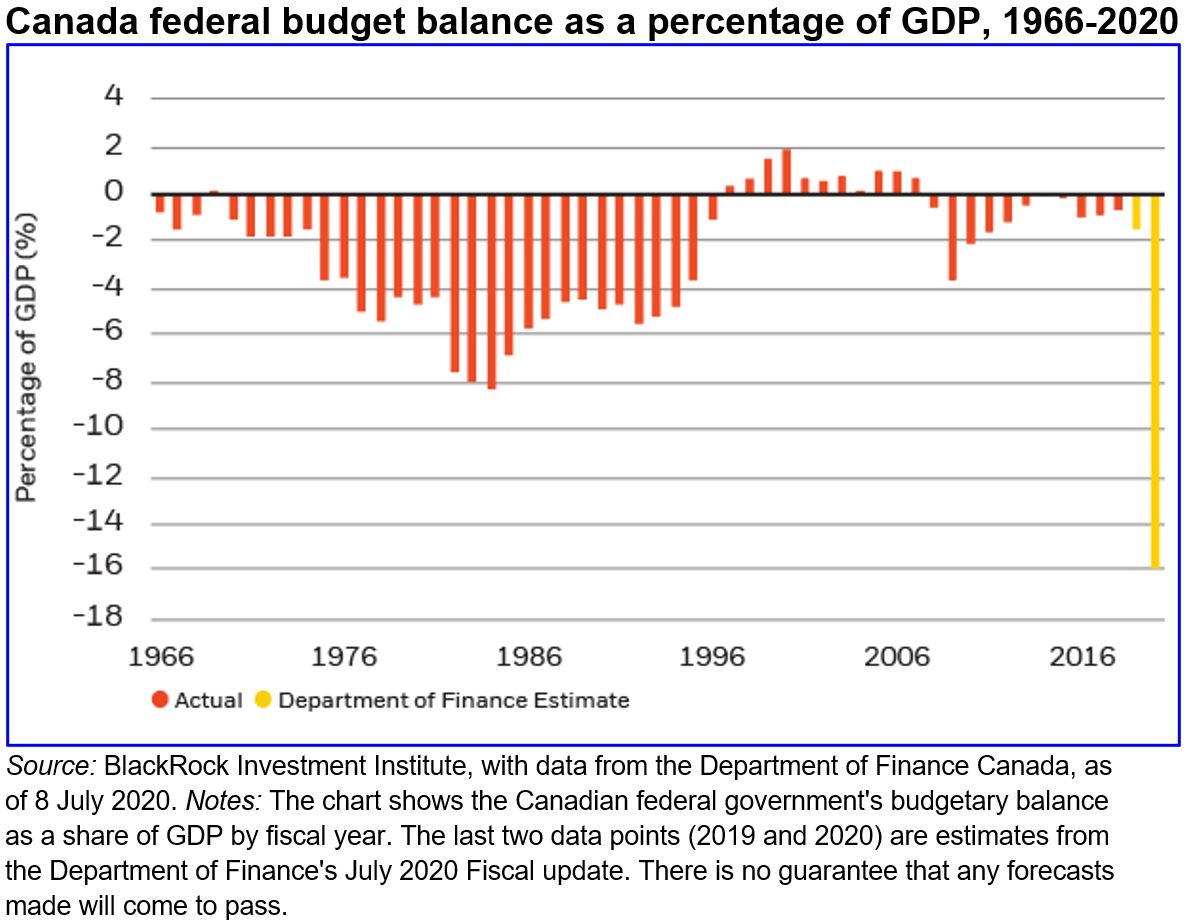 A key aspect of the policy revolution is the blurring of the lines between fiscal and monetary policy. Central banks are creating money that is then being transferred to individuals and businesses through these new fiscal programs.

In March, the Bank of Canada (BoC) launched its first-ever, large-scale asset purchase program with a commitment to buy at least C$5 billion of Government of Canada bonds each week and hold up to C$10 billion of corporate bonds. As a result, the BoC’s balance sheet assets have grown from merely 5% of GDP to almost a quarter of GDP in the span of a few months. The BoC’s scale of bond buying has nearly caught up with that of the U.S. Federal Reserve as a share of the economy (see chart below). 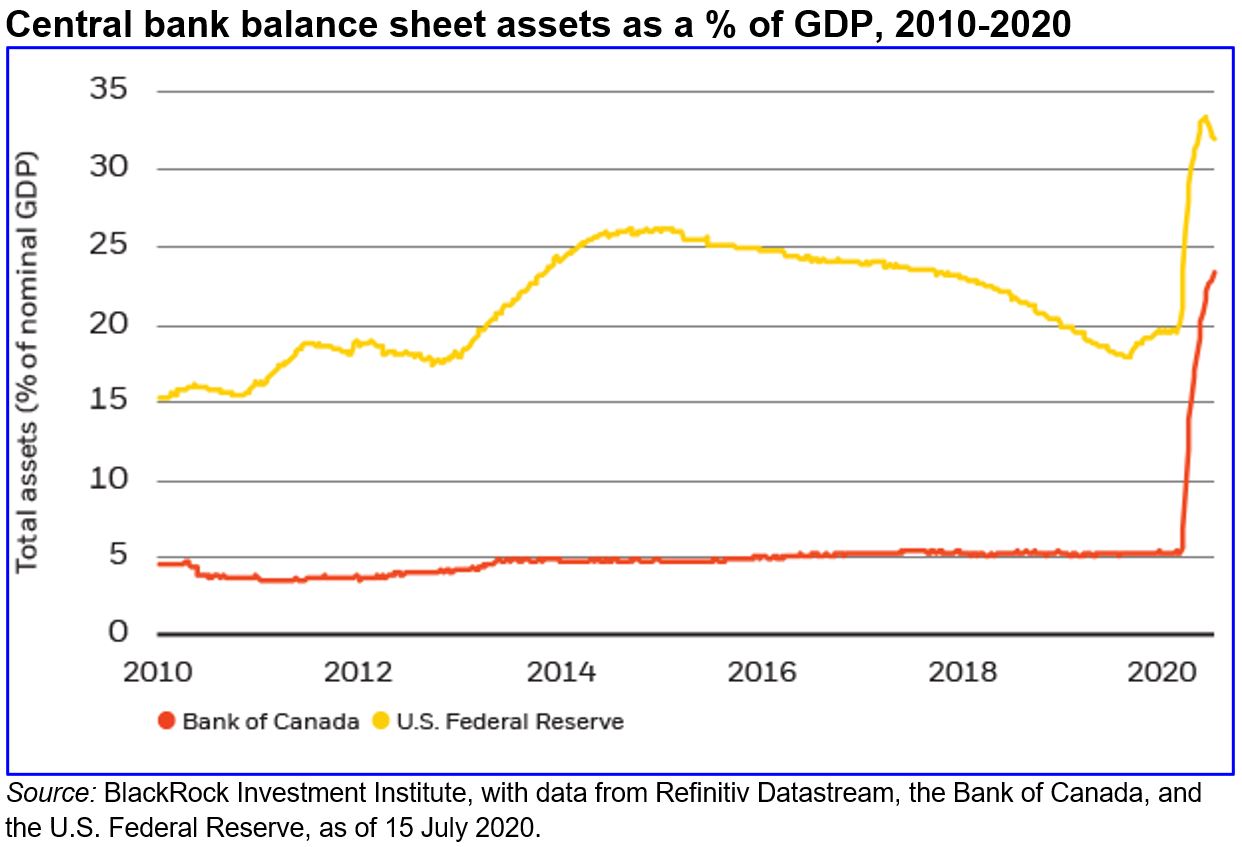 Perhaps more interesting, the BoC referred to its asset purchase program in a July 15 press release as “quantitative easing”– a term the bank had intentionally avoided in order to keep the focus on aiding market liquidity. But as bond market conditions improve and spreads narrow (see chart below), the Bank has unwound some of its emergency liquidity programs while focusing instead on its holdings of government securities and credit.

As such, under the leadership of Governor Macklem, the BoC more readily acknowledges the role that asset purchases will play in creating the financial conditions necessary to support economic activity. The Bank initiated forward guidance in its July monetary policy press release, stating its intention to keep rates at their effective lower bound until well after 2022 when it expects inflation to return to target. Similarly, the spree of bond buying is likely to persist until economic activity normalizes. 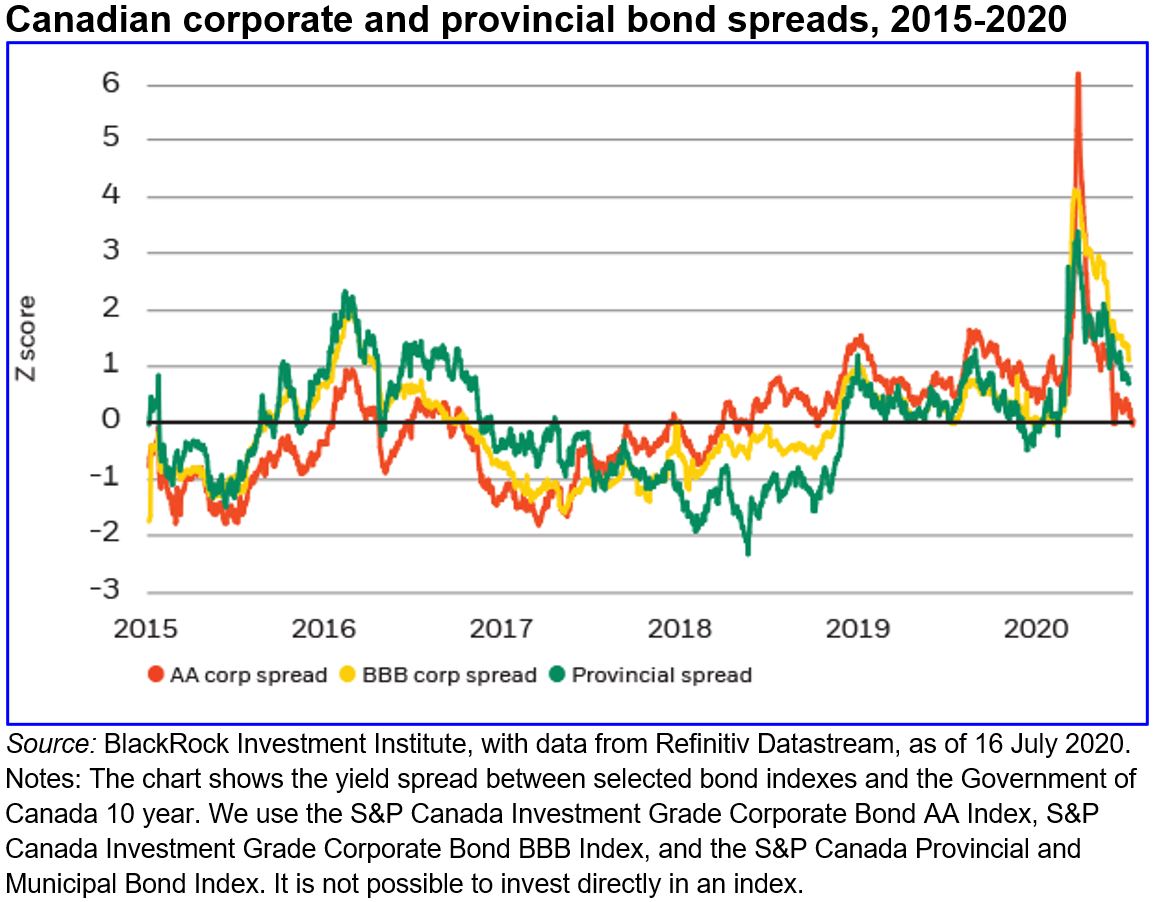 This policy revolution has supported an initial activity restart and restored investor confidence in financial markets even as the pandemic worsens in many countries. In the current context and over a strategic horizon, we hold an overweight to credit. Lower-for-even-longer government bond yields boost investor appetites for income, central banks are buyers of corporate bonds, and the interest income is more secure than dividend income.

The situation is more nuanced for government bonds, depending on the time horizon. Nominal government bonds have proved effective diversifiers during these recent episodes of heightened risk aversion, and this feature is unlikely to change if economic and policy uncertainty remain elevated.

Over a longer horizon, the policy revolution poses important challenges to nominal government bonds. First, the total return and diversification potential of nominal government bonds diminishes in a world where rates have less room to fall. Second, inflation risk could build without credible signposts for how central banks intend to both limit their financing of government spending once the pandemic fades and reverse balance sheet holdings. We believe inflation risk is not reflected in financial markets, with 10-year inflation premiums still well below central bank targets (see chart below). As a result, we’ve increased our preference for inflation-linked government bonds and lowered our allocation to nominals on a strategic basis to hedge against the evolving risk of higher inflation. 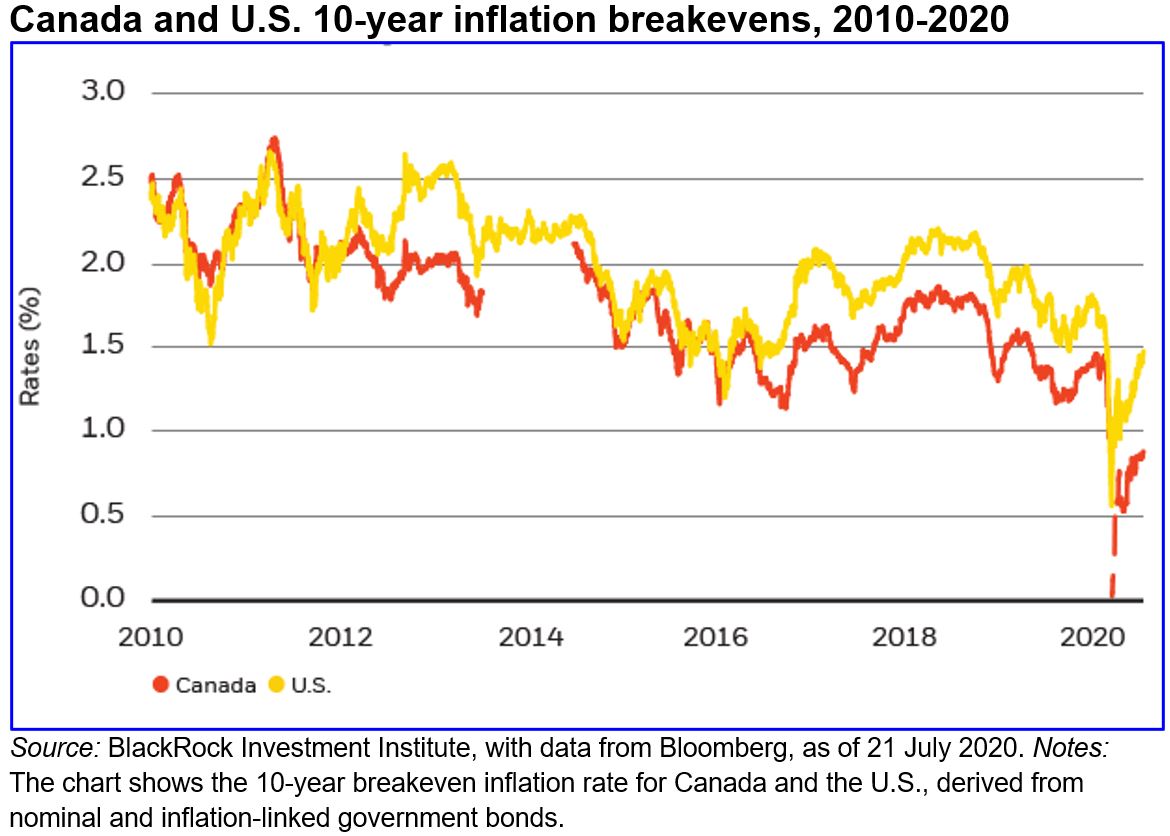 © 2020 BlackRock Asset Management Canada Limited. All rights reserved. iSHARES and BLACKROCK are registered trademarks of BlackRock, Inc., or its subsidiaries in the United States and elsewhere. This article first appeared in the BlackRock Blog on the BlackRock Canada website. Used with permission.