Outlook for final quarter of 2019 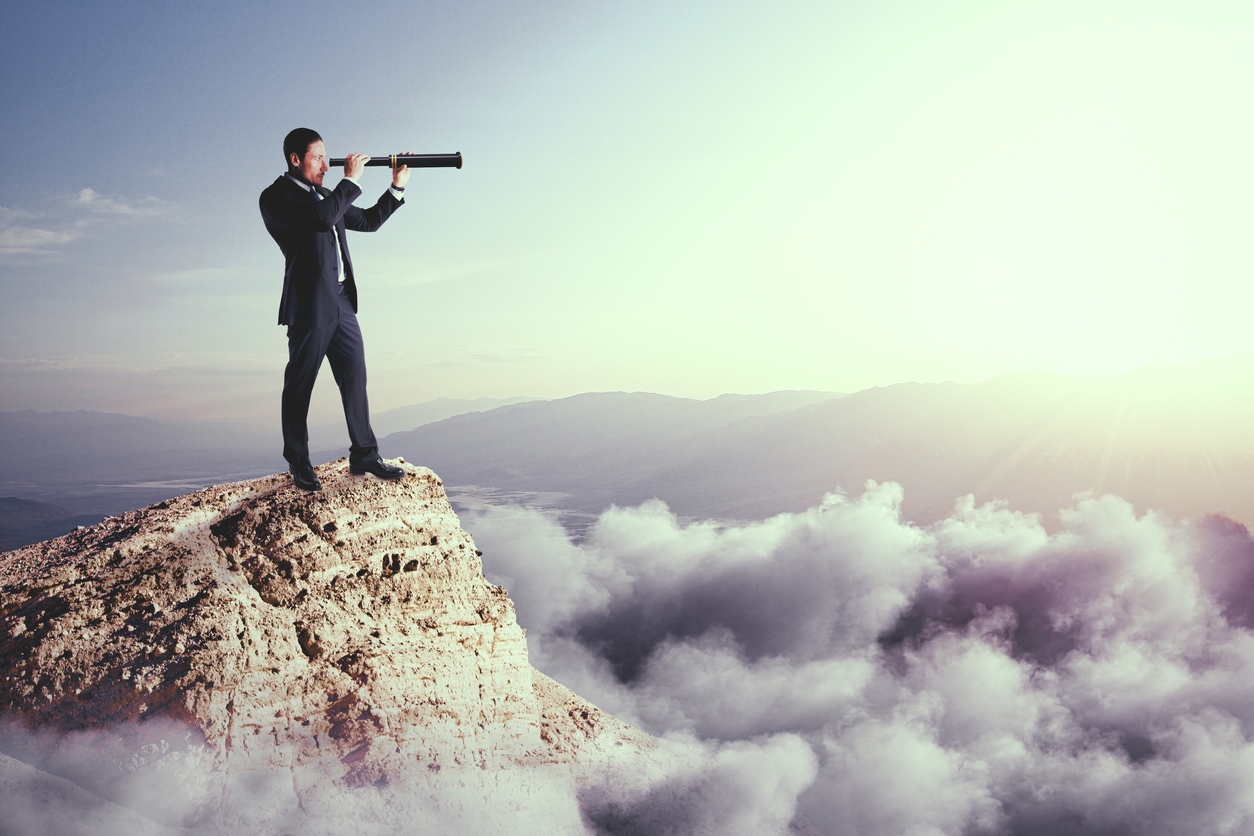 Canadian economic conditions appear surprisingly robust relative to a global economy feeling the pinch from a protectionist push, one of the new investment themes in our 2019 mid-year outlook. Our BlackRock Growth GPS for Canada has strengthened this year and now stands well above consensus expectations. This stands in stark contrast with the rest of the developed world (see Chart 1). Economic expectations for most countries have steadily slipped since the middle of 2018 and throughout 2019 as trade frictions and heightened geopolitical risk crimp business investment and manufacturing activity. 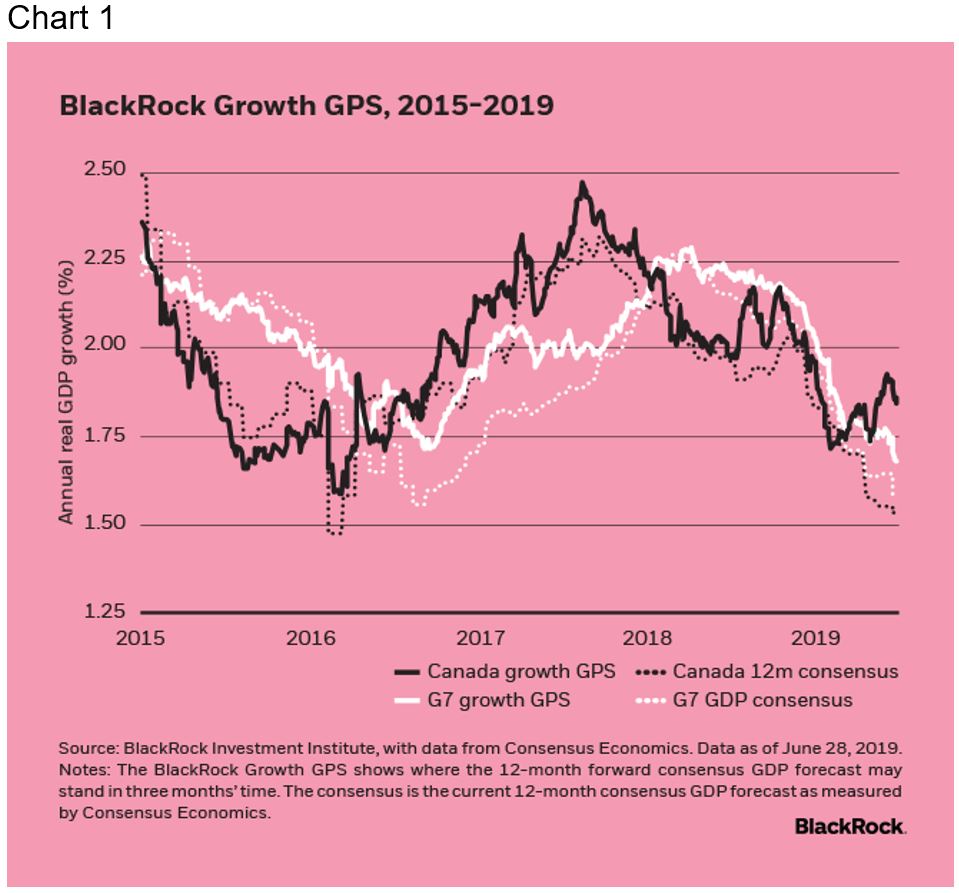 Canada’s economic picture is far from pristine, of course. Oil-producing regions are still feeling stress from mandatory production cutbacks, and household indebtedness sits at all-time highs. However, we find that the Canadian economy is benefitting from many positive tailwinds heading into the second half of 2019: a recovery in global oil prices; fading uncertainty related to the renegotiation of the North American Free Trade Agreement (NAFTA); removal of the U.S. administration’s steel and aluminum tariffs (and Canada’s retaliatory measures); falling interest rates; a currency that is cheap enough to encourage export growth; and healthy labor markets (see Charts 2 and 3 below). 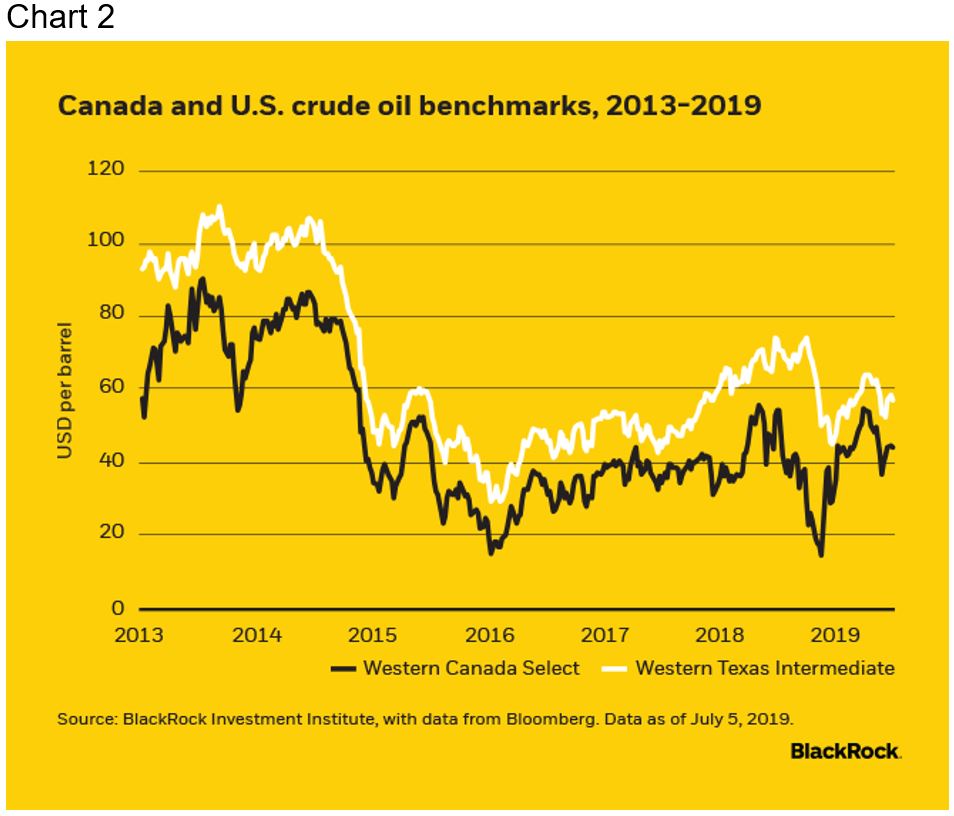 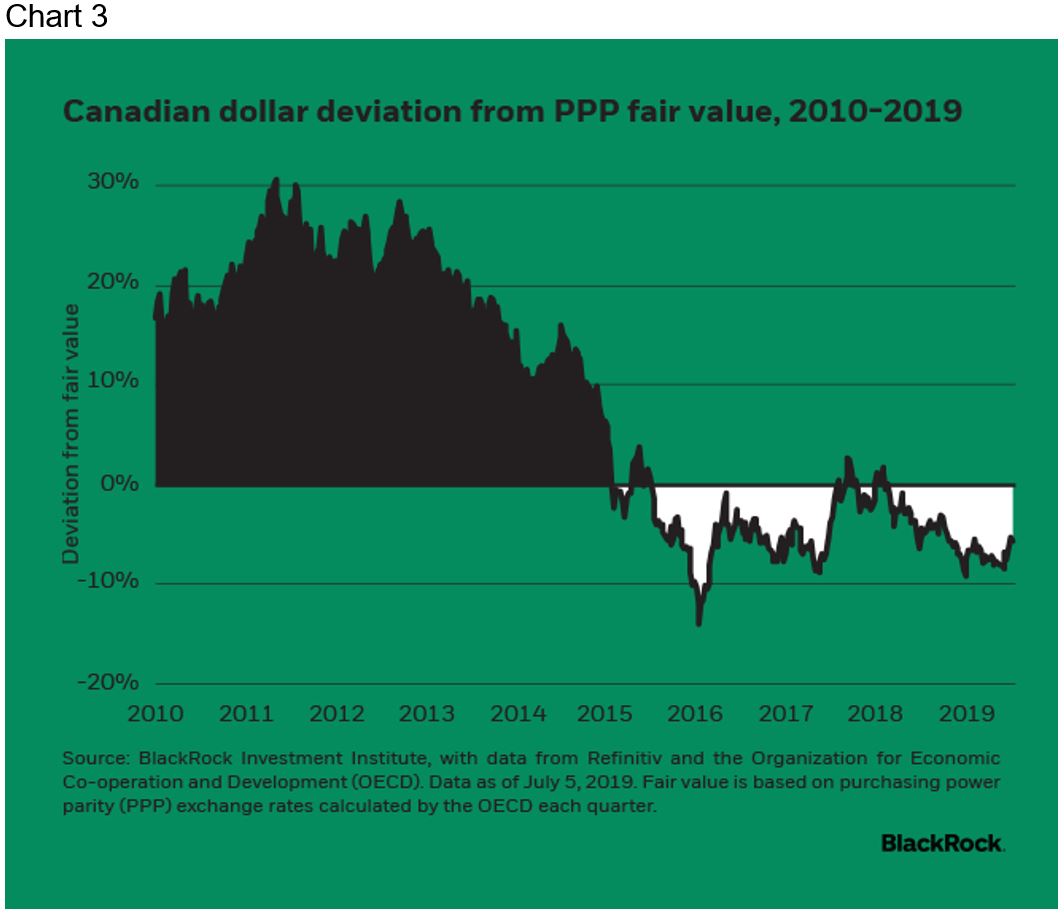 With the economy operating near full employment and inflation measures hovering around 2%, we think the Bank of Canada (BoC) will stay on hold for the balance of this year, even as the Fed and other key central banks are poised to ease (our second key theme, stretching the cycle). In addition to the better economic momentum, the BoC never raised rates as much as the Fed, with policy rates half a percentage point lower in Canada than in the United States (see Chart 4). How the loonie reacts to divergence between the BoC and the Fed is an important consideration, but any modest appreciation in the Canadian dollar is unlikely to become a headwind to the economy.

Political developments will also bear close attention in the second half of 2019 with Canadian federal elections in October and the new NAFTA agreement facing ratification delays in the U.S. Congress. If elections were held today, CBC’s election tracker suggests a minority government would likely emerge, although it’s unclear whether the Liberals or Conservatives would take the greater number of seats. This represents a sharp departure from the previous four years of majority rule in Ottawa, and the outcome likely has implications for Canada’s immigration, energy and climate change policies. As for NAFTA 2.0, we think the deal ultimately will be ratified by all member states, but full ratification could be delayed until 2020 given the discord in Washington, DC.

As for financial markets, the slowdown in global economic activity and expectations for easier monetary policy have supported Canadian government bonds and credit so far this year. As a result, Canadian fixed income returns have been every bit as strong as those south of the border even though Canadian monetary policy has been less dovish and the economy has firmed of late.

Credit allocations still make sense for investors seeking income, in our view, notwithstanding the tight spread environment. We have become more cautious holding long-duration exposure amid low absolute yield levels. Our third theme, raising resilience, reminds us of the importance of raising cash as portfolio ballast to guard against heightened geopolitical uncertainty at a time when government bonds are expensive relative to history.

Canadian equities registered the best first-half performance since 2009 given cheap valuations at the beginning of the year, reasonably solid economic results, and strong performance in growth-oriented sectors like healthcare and technology. Canadian earnings have been notably resilient this year during a period of caution and uncertainty over the global economic outlook. In local-currency terms, Canadian stocks once again underperformed the U.S. market given higher exposures to cyclical and value-heavy sectors, like energy and financials, which remained laggards in 2019.

Within equities, we prefer the U.S. market for its favorable economic growth and monetary policy dynamics, as well as reasonable valuations. We also favour minimum volatility exposures amid heightened macro uncertainty during this late phase of the business cycle. Canadian equities have the advantage of being cheap relative to U.S. stocks, but the disadvantage of above-average exposure to cyclical sectors at a time when we’re downgrading the outlook for global economic growth (see Chart 5). 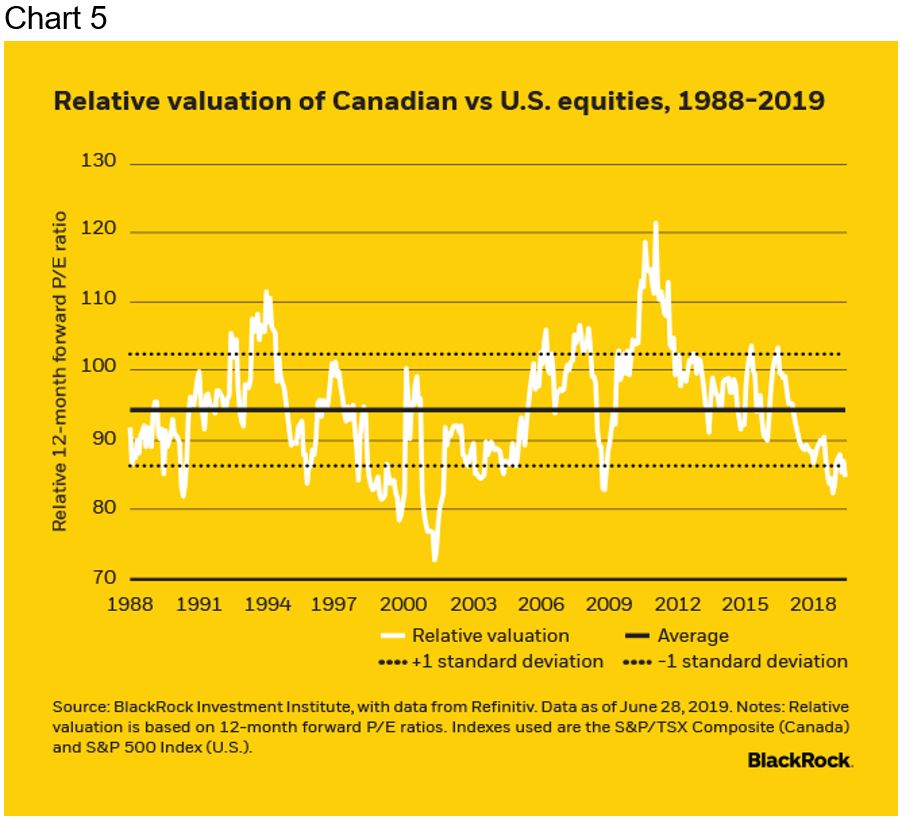 Looking further afield, we have upgraded our view on Europe from underweight to neutral on supportive policy easing, and we downgraded Japan and emerging markets given their greater exposure to what we see as a likely lull in Chinese growth.

© 2019 by Fund Library. All rights reserved. Reproduction in whole or in part by any means without prior written permission is prohibited. This article first appeared in the BlackRock Blog on the BlackRock Canada website.

This material is not intended to be relied upon as a forecast, research or investment advice, and is not a recommendation, offer or solicitation to buy or sell any securities or to adopt any investment strategy. The opinions expressed are as of the date indicated and may change as subsequent conditions vary. The information and opinions contained in this post are derived from proprietary and non-proprietary sources deemed by BlackRock to be reliable, are not necessarily all-inclusive and are not guaranteed as to accuracy. As such, no warranty of accuracy or reliability is given and no responsibility arising in any other way for errors and omissions (including responsibility to any person by reason of negligence) is accepted by BlackRock, its officers, employees or agents. This post may contain “forward-looking” information that is not purely historical in nature. Such information may include, among other things, projections and forecasts. There is no guarantee that any of these views will come to pass. Reliance upon information in this post is at the sole discretion of the reader.

© 2019 BlackRock Asset Management Canada Limited. All rights reserved. iSHARES and BLACKROCK are registered trademarks of BlackRock, Inc., or its subsidiaries in the United States and elsewhere. Used with permission.