Surrealism in the central bank matrix 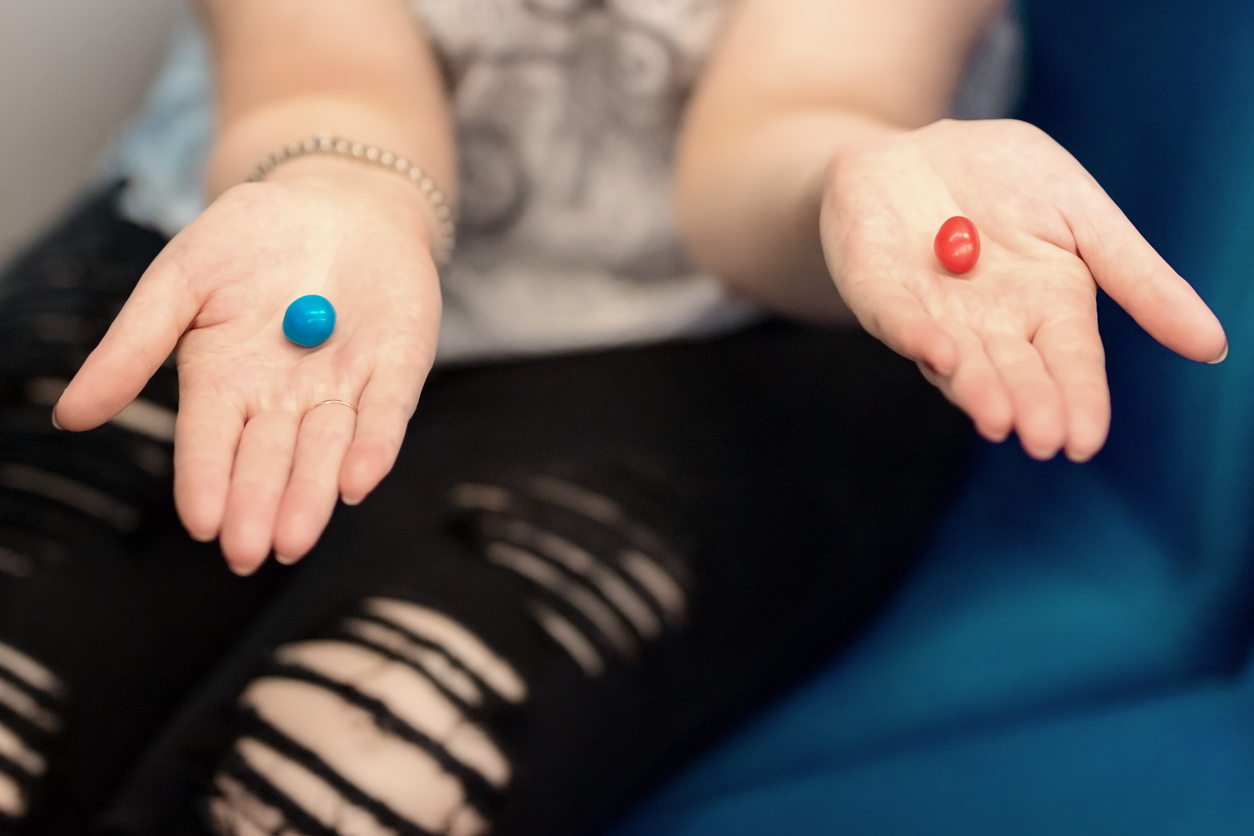 In the world of central banking, where mystique and oracular aloofness is a well-developed art form, the Fed’s press conference on June 16 was surprisingly candid. Rather than the typical verbal pirouettes, Chairman Jerome Powell was plain spoken: “I am confident that we are on a path to a very strong labor market…that shows low unemployment, high participation, rising wages for people across the spectrum.” No translation needed here. The Fed is increasingly optimistic on the economic outlook.

Yet, Powell’s message to the market was handled in the usual delicate and coddling manner (think of the way a mother deer would handle her newborn fawn). Members of the rate-setting Federal Open Market Committee (FOMC) adjusted their interest rate normalization outlook ever so slightly, bringing forward their expected date for two tiny rate hikes to 2023 from 2024. Powell also told journalists that the committee had “talked about talking about tapering.” Quantitative easing (QE) is still running at some $120 billion per month.

In the past, this press conference would have investors gathering around the punch bowl. Yet, in another sign of what an absurd time it is to be alive, the investment commentariat rushed to label this a “hawkish shock.” Markets reacted violently. The reflation trade, which began in earnest last October, rapidly unwound. The tech trade was revived, spurred on by lower longer-dated rates. So-called “yield steepener” positions were crushed. And, for investment geeks who spend a disproportionate part of their day studying the shape of the yield curve, they (ok fine, we) were surprised by the magnitude of the bond market selloff: the five-year Treasury bond posted its fourth-worst negative reaction in the 80 FOMC meetings since 2011.¹ 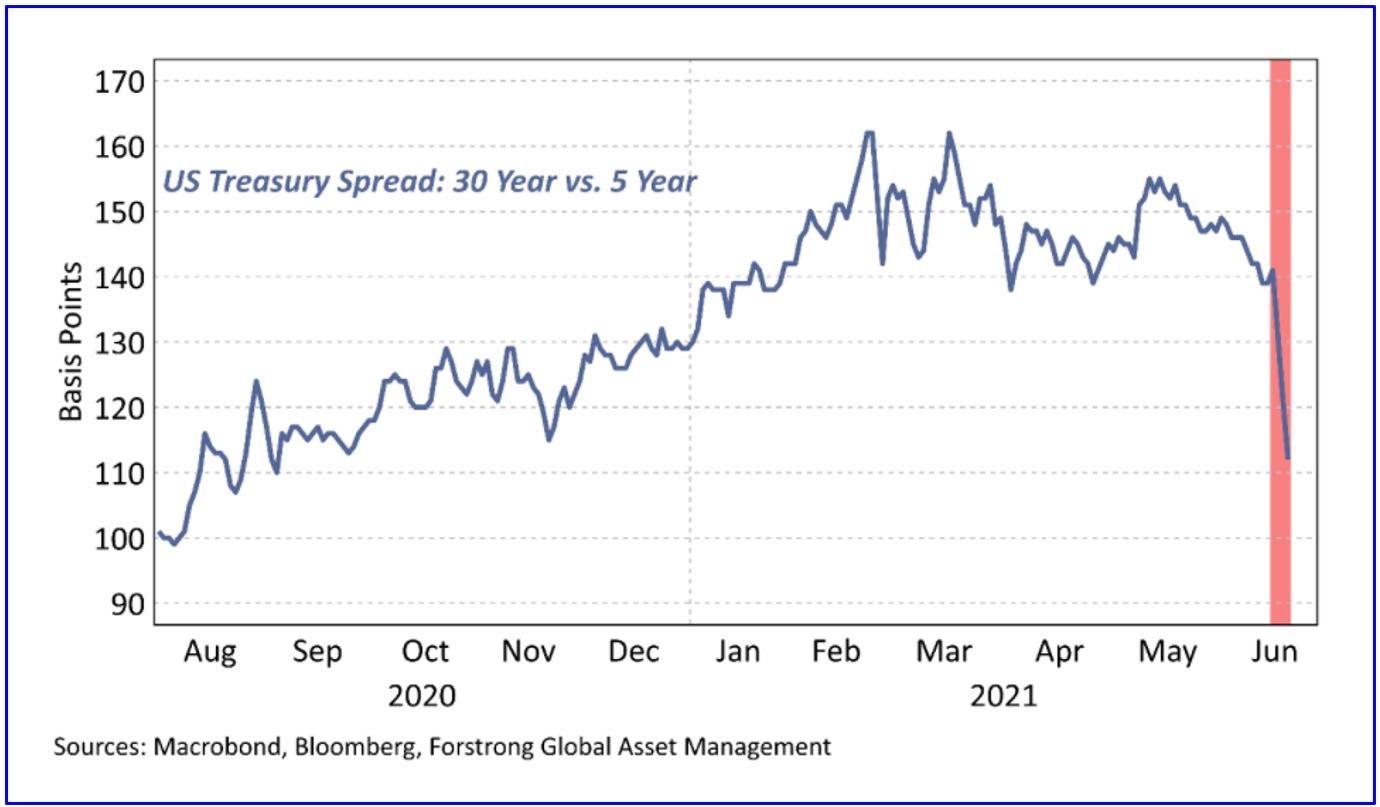 Where to from here? The central question is whether monetary policymakers can ever exit from an extended period of emergency policy measures – and whether we can avoid a repeat of 2013’s taper tantrum.

It is no secret that central bankers have become victims of their own success, becoming the lead sponsors of rising asset prices. They have also successfully engineered what my erudite colleague Wilfred Hahn calls an “era of surrealism” – where policymakers can flip the way the world is perceived, changing entire market perspectives and introducing new realities. Or, if readers prefer a metaphor from the 1999 sci-fi thriller The Matrix, central bankers now readily prescribe blue pills to prosper in a world of illusion. Investors have eagerly swallowed them.

In some ways, this is nothing new. The business of central banking has always been a confidence game. Their job is to knit together a tempest of data into a compelling story, claiming a clear and panoramic view of what is to come. But it has been taken to new heights in the post-crisis period. This is not due to a more persuasive stable of speech writers. Rather, it is an unspoken and symbiotic bond between central banks and the markets. Everyone now understands the rules of the game. Hahn concludes, “surrealism is now an accepted and necessary policy instrument.”

The reality is central banks have become creatures of financial markets rather than just stewards of the real economy. Is this good? Of course not. Attempts to cushion volatility always end up creating instabilities in the future. And the challenge is that markets, now reliant on a steady supply of monetary stimulus, perceive good fundamental news as bad news for policy…which means bad news is good news for the market (got that?).

Taper minus the tantrum?

Can we ever get away from this? After all, the last time a taper was tried in May 2013 by then Fed-chairman Ben Bernanke, the collateral damage was significant. But today’s economic and investment climate is entirely different. To start, US GDP in 2013 came in at just 2.6%. Contrast that with today: economic growth is ripping. The Fed’s own forecast for GDP this year is at 7%, to be followed by 3.3% in 2022. The timeline for policy normalization is being accelerated because the economy is making rapid progress towards the Fed’s goals. With higher growth, markets are far less vulnerable to a taper tantrum. Gradually, good news can actually become good news.

In fact, the current recovery is unlike any in modern financial history, surprising economists and policymakers by its strength. The damage to household finances and financial institutions after the 2007 housing crash led to deleveraging and a decline in demand that weighed on the economy for years. By contrast, consumers are now powered by trillions in extra savings, and household debt-service burdens that are near their lowest levels since 1980. And momentum and confidence is building from faster rollouts of vaccinations. Amid growth rates not seen in decades, why wouldn’t the Fed be lifting rates by late 2023?

What about the rest of the world? Emerging markets (EM) suffered most in 2013 with persistent capital outflows for years after. But here again, circumstances are entirely different. Consider that the first taper engineered a multi-year appreciation of the U.S. dollar, peaking in late 2016. This sustained dollar rally, rather than the short-lived spike in interest rates, caused the most damage to EM. The dollar’s surge also contributed to a collapse in commodity prices, generating a double blow to the resource-rich EM nations.

A repeat of the above is highly unlikely. In 2013, the U.S. dollar had just concluded a decade-long bear market. The currency was under-loved, under-owned, and primed for a multi-year rally. The taper was just a catalyst.

The last difference is market positioning. In 2013, global asset allocators remained optimistic on EM prospects, with EM bourses trading at similar multiples as developed markets. Capital inflows were strong. Today, EM equities trade at a large discount to Western markets and remain deeply out of favour (despite a stealth relative outperformance building over the last year). All of this suggests a similar EM tantrum episode to 2013 is highly unlikely.

What about the EM elephant in the room? Forget the G7, which at one point was a collection of the world’s largest countries (not true, with the group’s share of global GDP falling from over 50% in 1975 to less than 30% today) and most industrialized countries (not true either, with countries like Taiwan and South Korea having a far higher manufacturing percentage of GDP). Rather, China, with its sheer size and enormous contribution to global growth, is increasingly the nation that needs to be watched.

Here, a glaring difference since the pandemic began exists: Beijing began to normalize macro policies nearly as soon as the economy rebounded from 2020’s Covid-induced sudden stop. This credit tightening stands in stark contrast to other major economies, where policy settings remain ultra-stimulative. The chance that Chinese assets, while hyper-sensitive to policy settings, have a major negative reaction to a Fed taper is low simply because their domestic policies have already been restrictive for some time.

There is one last crucial difference that argues for a more muted response to the coming taper: Monetary policy is no longer the only game in town. In the post-2008 period, global governments flatly refused to engage the fiscal lever in a meaningful way. Deleveraging, austerity, and balanced budgets were in vogue. Monetary policymakers were forced to carry the entire policy burden – grumbling the entire way and becoming the world’s leading fiscal stimulus evangelists.

But the pandemic was a moment of revolutionary break. Deficit-shaming and austerity are now dead. Fiscal stimulus and “high pressure” economics, where policymakers aim to push GDP growth above its potential and unemployment below the natural rate, are back (more on this topic here). Crucially, fiscal thrusts pack a bigger punch than the monetary variety. The transmission effects are much more direct, boosting consumption, investment, and liquidity. More money immediately enters circulation.

Investors may debate the size and efficacy of government spending. But those are worries for another day. History shows that expansionary monetary and fiscal policies can “work” for some time before becoming problematic. For example, it took nearly 20 years for the post-war Keynesian period to cause inflationary problems. Investors should not lose sight of the ongoing regime shift. The result will be higher growth and modestly higher inflation. Monetary policy normalization becomes far easier to engineer in this environment.

Before Powell’s press conference in June, market technicals and sentiment were stretched. Expectations and positioning had come a long way from March 2020’s pandemic lows. The latest data on household assets show equities at a record relative to all financial assets (at 36.5%, mutual funds and equities account for a greater share than any point since at least 1952). The pros were all in too, cutting cash levels to a lowly 3.9% (according to Bank of America’s latest fund manager survey). Markets were – and remain – vulnerable to a short-term correction.

But investors should not bet on a return to the trend seen in June where long-term bond yields fell and past investment leadership like technology stocks gained. Why? Because nothing has fundamentally changed with the Fed’s communication. In fact, it is more evidence that we are moving away from an era of secular stagnation. The Fed will remain purposefully behind the curve. Real rates will remain deeply negative across the developed world. And, reflation trades will once again re-assert themselves. We are only in the early stages of a long journey.

Tyler Mordy, CFA, is CEO and CIO of Forstrong Global Asset Management Inc., engaged in top-down strategy, investment policy, and securities selection. He specializes in global investment strategy and ETF trends. This article first appeared in Forstrong’s Global Thinking blog. Used with permission. You can reach Tyler by phone at Forstrong Global, toll-free 1-888-419-6715, or by email at tmordy@forstrong.com. Follow Tyler on Twitter at @TylerMordy and @ForstrongGlobal.

© 2021 by Forstrong Global. All rights reserved. Reproduction in whole or in part by any means without prior written permission is prohibited. Used with permission.

The foregoing is for general information purposes only and is the opinion of the writer. The author and clients of Forstrong Global Asset Management may have positions in securities mentioned. Performance statistics are calculated from documented actual investment strategies as set by Forstrong’s Investment Committee and applied to its portfolios mandates, and are intended to provide an approximation of composite results for separately managed accounts. Actual performance of individual separate accounts may vary with average gross “composite” performance statistics presented here due to client-specific portfolio differences with respect to size, inflow/outflow history, and inception dates, as well as intra-day market volatilities versus daily closing prices. Performance numbers are net of total ETF expense ratios and custody fees, but before withholding taxes, transaction costs and other investment management and advisor fees. Commissions and management fees may be associated with exchange-traded funds. Please read the prospectus before investing. Securities mentioned carry risk of loss, and no guarantee of performance is made or implied. This information is not intended to provide specific personalized advice including, without limitation, investment, financial, legal, accounting or tax advice.