Transformers: the rise of the tech giants 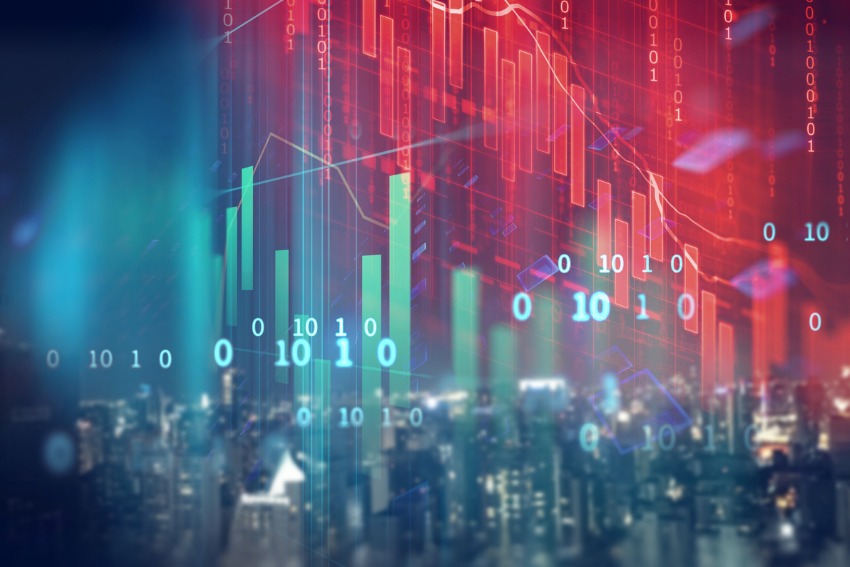 “The future ain’t what it used to be.” – Yogi Berra

The S&P 500 experienced its sharpest downturn in history this spring. Staring into the abyss at the bottom, few could have imagined that we were in fact on the eve of one of the strongest bull upturns in history. We certainly didn’t. Then again, this is a pattern that tends to repeat itself over and over in investing.

“The thing I find most interesting about investing is how paradoxical it is: how often the things that seem most obvious – on which everyone agrees – turn out not to be true.” – Howard Marks

The market’s recovery has been breathtaking. The S&P 500 reached a new all time high by mid August, making it the shortest bear market in history and a best case “V” shaped recovery. But market averages are misleading. Like Dickens’ classic novel A Tale of Two Cities, “It was the best of times, it was the worst of times….” There have been a handful of big winners, but many more losers. The market’s recovery has been highly uneven.

Most global economies are still reeling from lockdowns and other measures put in place to control the pandemic. COVID-19 is expected to lead to the deepest global recession in decades. Baseline forecasts1 are projecting a 5.2% contraction in global growth this year. Ironically, the only major global economy expected to grow this year is China, the epicenter of the pandemic. Its stock market has also been one of the best performing in the world. Very few would have forecast this in January when the shocking videos of overflowing Wuhan hospitals first emerged.

There is a lot of debate about whether the “stock market” is disconnected from the “real economy.” This makes intuitive sense. Headlines about high unemployment, bankruptcies, and other pandemic-related issues are alarming. But our intuition often fools us. There are several sensible interrelated reasons why markets have made a recovery, despite worrisome issues. 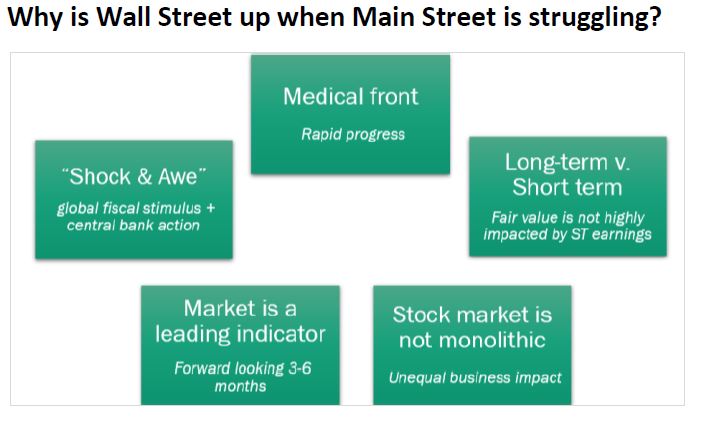 When U.S. Federal Reserve Board Chairman Jerome Powell said, “We will not run out of money,” market veterans knew it was code for, “Don’t fight the Fed.” The unprecedented speed and scale of the global fiscal stimulus and central bank action broke the momentum in the market’s negative feedback loop. Beyond restoring market confidence as buyer of last resort, central bank actions have led to even lower interest rates, which usually equates to higher business values.

Endless volumes of digital ink have been spilled writing about these developments. We won’t rehash them here. While there will be unintended second- and third-order effects, the “shock and awe” actions from central authorities bought us more time to deal with the real issue – the mortality and morbidity issues from COVID-19.

The good news is that the progress on the medical front has been astounding. So many of the world’s top scientists and researchers have collaborated urgently on this single topic. Advances in therapeutics and vaccines are taking place at a breathtaking pace.

Consumer behaviour could change quickly if an effective vaccine becomes available in mass quantities. This would likely lead to a resurgence of economic activity. This pandemic, like others before it, will eventually end. The question is how long and how much damage will be caused in the meantime. Which brings us to the long-term versus the short-term perspective.

In the short term, fundamentals rarely matter much to stock performance. Narratives driven by investor psychology and structural factors are much more powerful determinants of near-term price action. But fundamentals matter over the long haul. The longer you hold on to your stocks, the more your returns will reflect the economics of the underlying businesses. 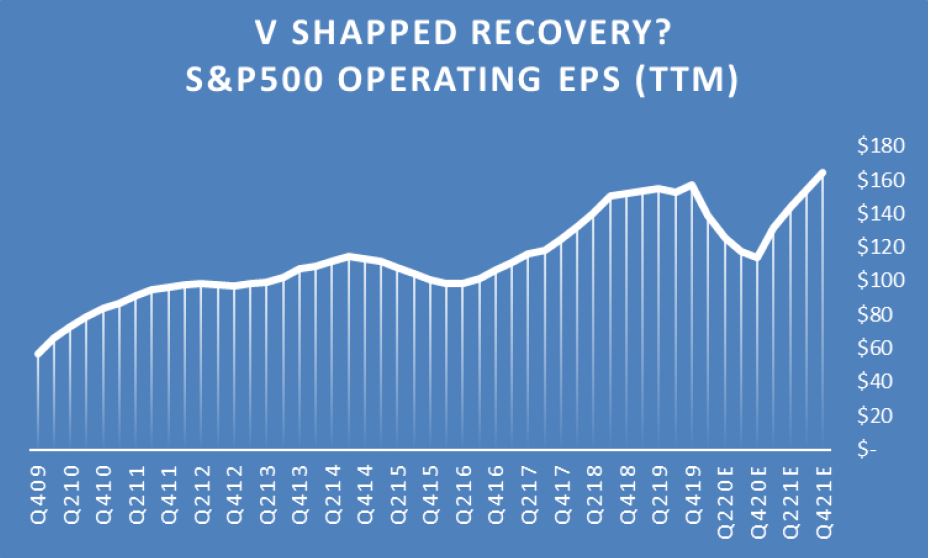 The truth is that earnings over the near term only have a minor impact on the economic value of a company. The sudden plunge in the stock market this spring would only have a significant impact if it impaired earnings over a multi-year time horizon, or companies were in danger of insolvency. Currently, consensus estimates are projecting a full earnings recovery by late 20212. At this point, it appears the worst is behind us from an earnings perspective.

The stock market is a leading indicator, which typically looks three to six months ahead. During periods of panic and distress, investors sometimes forget that stocks can go higher even when the real economy is getting worse. During the last major downturn, the S&P 500 bottomed on March 9, 2009, closing at 677. From there the market started to power higher, beginning its journey as the longest and biggest bull market in history, even though the “real economy” did not bottom until June 20093.

Timing is clearly one issue. But the magnitude of the change is another, where the connection between the “real economy” and the “stock market” is not as strong as commonly believed. During the 2008 financial crisis, stock markets around the world plummeted approximately 30%-60%, but of course, the real economy did not fall by a similar amount. The following bull market saw the S&P 500 rise five-fold to the next peak in early 2020, which is also not reflective of real GDP growth.

Digital giants vs the rest of the world

Companies listed in the stock market are only one part of the real economy, which is much broader than just the prospects of those companies traded on stock exchanges.

There are hundreds of thousands of small businesses that had to shut down or were severely impaired but were not publicly listed. On the flip side of the coin there is Amazon.com, already one of the world’s largest online retailers which became an even greater necessity in a lockdown. Amazon’s cloud business also has been a beneficiary of accelerated online migration. Private offline businesses around the world face hardship due to global lockdowns, while Amazon picked up their business.

In a sense, an increased share of the industry profit pools that formerly resided with small private businesses all over the globe have shifted to Amazon.com, a U.S. listed security. At the margin, public investors in Amazon benefited while private investors in the real economy lost share. Thus, the real economy could be hit over the short term. But because the Amazons, Microsofts, and Apples of the world are experiencing heightened demand from their customers and already account for a large portion of the S&P 500, overall markets could be surprisingly resilient, or even go up. That dynamic is even more visible in the more concentrated and tech-centric Nasdaq.

The market is a collection of businesses operating in different markets, with distinct cycles and possessing unique economic prospects. Many of the most battered industries do not matter much because of the way stock indexes are structured. Some of the worst hit and highly visible industries like department stores, airlines, and oil and gas equipment services are only a very small part of the S&P500. They are more than offset by the tailwinds experienced by the giant tech beneficiaries.

Next time: Our outlook and tailwinds that benefit the Pender strategy.

© Copyright 2020 by PenderFund Capital Management Ltd. All rights reserved. Reproduction in whole or in part by any means without prior written permission is prohibited.

Commissions, trailing commissions, management fees and expenses all may be associated with mutual fund investments. Please read the simplified prospectus before investing. The indicated rates of return are the historical annual compounded total returns including changes in net asset value and assume reinvestment of all distributions and are net of all management and administrative fees, but do not take into account sales, redemption or optional charges or income taxes payable by any security holder that would have reduced returns. Mutual funds are not guaranteed, their values change frequently and past performance may not be repeated. This communication is intended for information purposes only and does not constitute an offer to buy or sell our products or services nor is it intended as investment and/or financial advice on any subject matter and is provided for your information only. Every effort has been made to ensure the accuracy of its contents. Certain of the statements made may contain forward-looking statements, which involve known and unknown risk, uncertainties and other factors which may cause the actual results, performance or achievements of the Company, or industry results, to be materially different from any future results, performance or achievements expressed or implied by such forward-looking statements.