Whither Canada and the TSX? 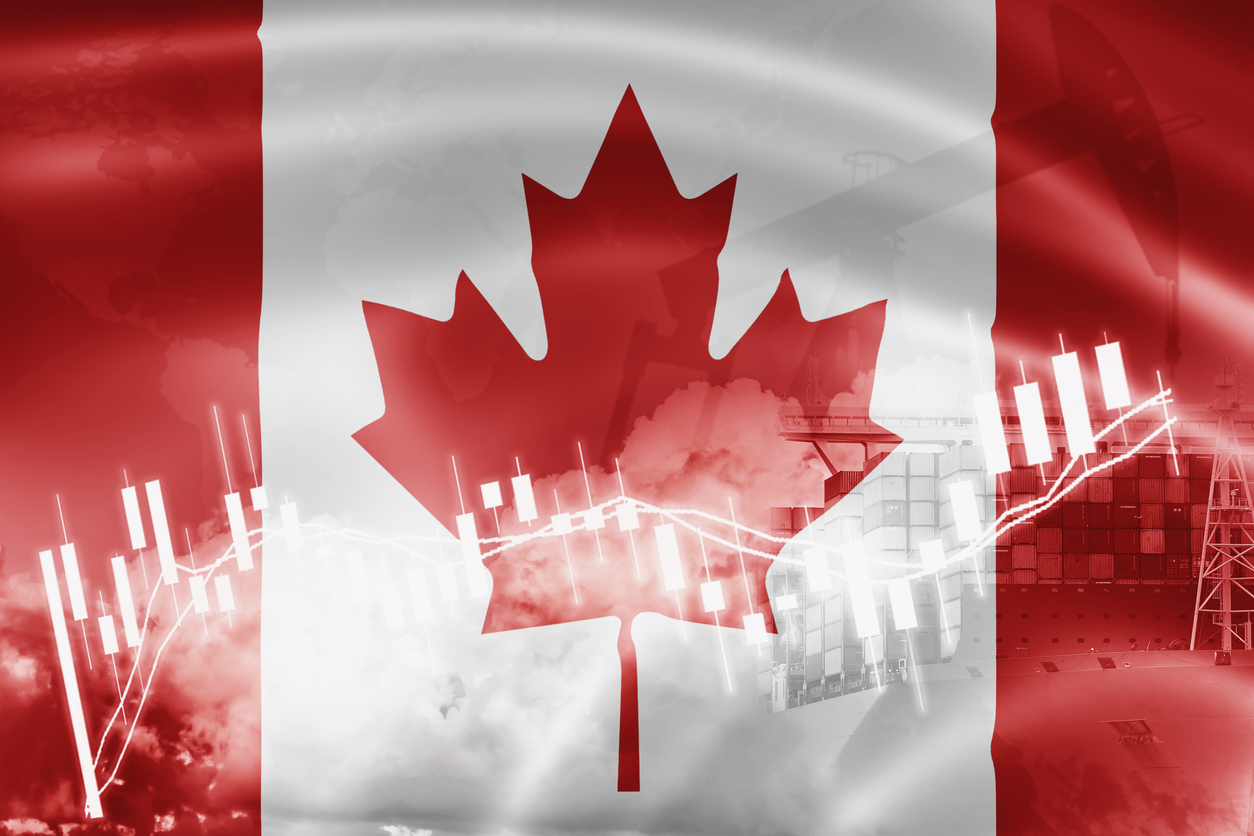 More of the (dismal) same, or a new leaf?

Avert your eyes dear Canadians, politics are becoming contentious in this country. Incumbent prime minister Justin Trudeau is confronting a challenging cocktail of controversy: an acrimonious exit of finance minister Bill Morneau; an ongoing ethics investigation; an annualized 38.7% plunge in second quarter GDP; and – this just in – a projected $343 billion record budget deficit this year (a figure that would make even Italian politicians blush). That’s a stiff drink to swallow. And, undoubtedly, the force behind the prime minister’s decision to prorogue parliament until September 23, when he plans to serve up an ostensibly more palatable outlook on the government’s policy path.

Meanwhile, enter Erin O’Toole. The newly installed leader of the main opposition party is a self-described “true blue conservative” (note to self: Google what that means), lawyer, former air force officer and, most evidently, flaunts a readiness to politically waterboard Trudeau at first opportunity. The winning prize for O’Toole? Canada’s return to conservative leadership.

There may be no punchline here, as the brawl is bound to get dirty – at least by Canadian standards. But the two men will clash over the central economic debate raging in many other countries: whether to keep lurching left – lavishing more capital into the government’s pandemic-induced stimulus spending – or tack right – throwing a proverbial stick in the spoke of fiscal largesse. O’Toole and the other opposition parties will get their first chance to bring down the government as early as this month when parliament reconvenes.

Two crucial questions fall out of the above. First, do politics really matter for the medium-term Canadian economic outlook? In terms of fiscal and monetary trajectories, yes they do. But, as we have reminded our clients over the last five years, Canada faces an ongoing “branding” issue. Pipeline constraints, a sagging domestic oil price, a deteriorating bi-lateral trade relationship with the U.S.…the list goes on. All of which has culminated in a globally underperforming stock market and currency. Since the beginning of 2017, MSCI Canada has underperformed MSCI All-Country World ex-Canada by nearly 30% (see the graph below). 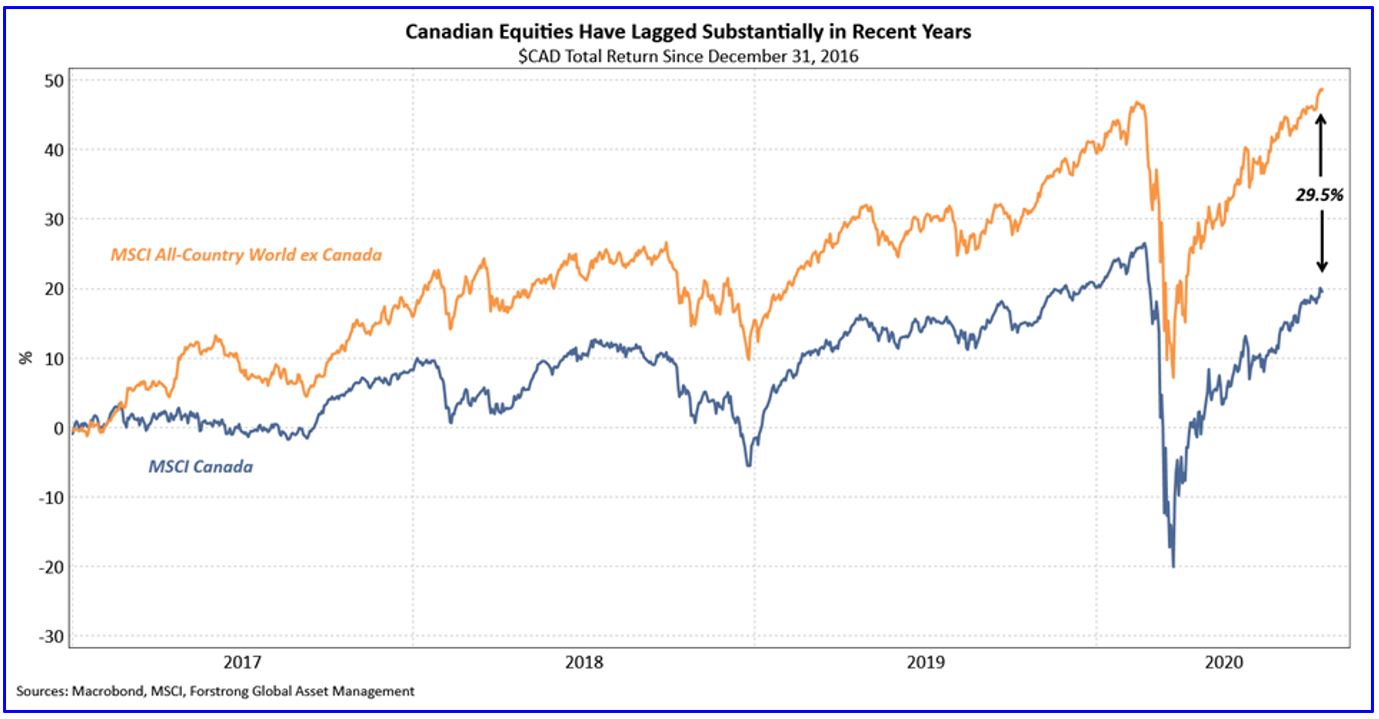 Like fashion, once brands turn, it can be difficult to revive them. What’s more, the brand status of nations regularly rises and falls with economic cycles (look no further than Latin America for an extreme example of this). Foreign capital flees and becomes cautious in its return. For Canada, this is a big deal. On the world scale, the currency float is small. Marginal flows can add up to big moves in the Canadian dollar.

At one point, Canada was everyone’s favourite brand…the Lululemon of fitness apparel. This occurred during the last commodity super-cycle. It created a set of conditions so good that the Canadian dollar became a cult currency, plastered all over magazine covers and repeatedly highlighted by investment newsletters as their top currency.

Alas, Canada is now far out of fashion. Several macro headwinds remain. Most conspicuously, the country still carries the weight of substantial credit imbalances. Total household debt has far outpaced disposable income and wages. And contrary to the successful private-sector deleveraging episodes that occurred in the U.S. and Eurozone since 2008, Canada had no such reckoning. In fact, RBC’s housing affordability report from last year shows that Canadians now spend more than half their income on average to cover home ownership costs. In Toronto and Vancouver, that figure is a dizzying 66% and 85%, respectively.

Canada’s sizeable and high-cost energy sector has also been pummeled. Revenue from Alberta’s oil patch is forecast to be just $1.2 billion this year. That’s a long way from the heady days of 2014-15 when revenues were nearly $9 billion.

Not all is bleak. Canada’s housing market is being supported by falling interest rates and ongoing fiscal stimulus. Oil has recovered somewhat. Canadian banks are also in a strong position. They have greater protection against housing defaults (since borrowers in mortgages with high loan-to-value ratios are required to purchase mortgage insurance) and greater recourse for mortgage defaults than the U.S. (which keeps borrowers more cautious with their mortgage commitments). The chance of a repeat 2008 episode, when the US and Eurozone banking systems had to be recapitalized, are low. Smart immigration policies continue to drive the longer-running growth of an educated workforce. Canada’s cyclically-oriented economy will also experience general tailwinds from improving economic conditions happening around the world.

But a longer-running issue still exists. At its core, Canada has been far too complacent in strengthening its international competitiveness. The country relied on currency depreciation throughout the 1990s, then the commodity super-cycle boom in the 2000s, and, most recently, the housing and credit excesses of the 2010s for growth.

A key issue is that Canadian businesses have persistently under-invested in productivity-enhancing processes. The Ifo Institute’s (a Munich-based economic think tank) widely followed survey indicates that Canadian competitiveness deteriorated materially from the late-1990s until 2017 (recovering somewhat again due to currency depreciation). Looking ahead, productivity improvements take time. What chance is there that Canada will outperform its more competitive global peers over the coming years? Adding it all up, Canada is destined for middling performance. Better opportunities exist elsewhere.

The return of fiscal dominance

All of which brings us to the second question. Does any of this matter for the macro investor? After all, Canada is a small fry on the world scale and does not meaningfully move the needle for world trends. It simply follows them. Oil prices, even Western Canadian Select, are predominantly set by global factors. Canada is also hostage to the fortunes of the largest economy in the world, sending about three-quarters of its exports to the U.S. And, domestic government policies are more driven by the policy du jour set around the world. For example, how many central banks have bucked the trend and kept interest rates high in the post-2008 period? Answer: almost none (unless you reside in a country whose president is Emmerson Mnangagwa).

Yet the average Canadian investor remains over-invested in Canada. Like so many other home biases, this is problematic. The Canadian stock market is a two-trick pony and an inadequate resource for those seeking much-needed global diversification. Canadian energy and materials stocks account for 28% of stock market capitalization, compared with approximately 8% globally. Financials, the other heavyweight in the Canadian market, account for 28% of the domestic benchmark, versus 13% globally.

What matters for macro investors in the period ahead is the dynamics of three major economic blocs: the U.S.; the Eurozone; and Emerging Asia (accounting for some two thirds of nominal global GDP). Getting this right is crucial.

Layered behind all this is a pandemic that has imposed swift regime changes in macroeconomic policies around the world. The feared fiscal cliffs of yesteryear have turned to fiscal ramps. Even O’Toole will find it difficult to reign in deficits. In fact, this year’s health crisis is very likely the beginning of a new era of Keynesian macroeconomic management (similar to the long-term investment boom from the end of World War II until the late 1960s) driven by three factors: (a) the electrification of the world’s dominant energy and transport technologies, which is far more capital intensive than the electronics and software investment of the last 20 years; (b) the Eurozone’s fiscal integration and complete abandonment of austerity; and (c) an innovation thrust driven by China’s need for technological self-reliance away from the U.S. (big rivalries have always acted as a spur for investment, such as the U.K. and Germany during the turn of the twentieth century or the longer-running U.S.-Soviet cold war).

Of course, central banks have committed to financing this with zero or negative interest rates for years to come. For more on this, see our recent halftime report.

Admittedly, we still get misty-eyed during the “true north strong and free” part of our national anthem or simply gazing across the mountains of British Columbia. And, one cannot help but confess a certain amount of pride for the civility of Canadian politics. Even for the conversations simmering outside of mainstream media, politics in this country will always be a PG affair. And while our friends south of the border seem to be mixing drinks recently, Canadians will always be content sipping Chardonnay. But, for serious investors, the quest for investment outperformance must be politically agnostic and passport-blind. Neither is easy.

Tyler Mordy, CFA, is CEO and CIO of Forstrong Global Asset Management Inc., engaged in top-down strategy, investment policy, and securities selection. He specializes in global investment strategy and ETF trends. This article first appeared in Forstrong’s Aug. 31 edition of “Ask Forstrong,” available on Forstrong’s Global Thinking blog. Used with permission. You can reach Tyler by phone at Forstrong Global, toll-free 1-888-419-6715, or by email at tmordy@forstrong.com. Follow Tyler on Twitter at @TylerMordy and @ForstrongGlobal.